The Olive Oil Center of Excellence of GEA signs contract for the largest oil mill in Asia in the Kingdom Saudi Arabia. The project, which exceeds three million euros, offers an integrated solution that includes civil engineering, automation, processes, training and machinery 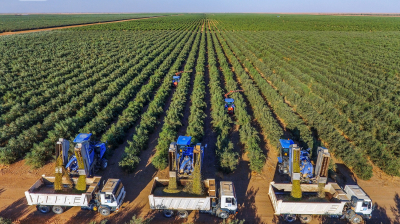 GEA Olive Oil is proud to annunciate that has signed one of the largest contracts to build and supply the industrial equipment of the biggest oil mill located in Saudi Arabia. This amount of this important operation exceeds three million euros.

The project led by GEA has allowed to combine the efforts of several Spanish machinery manufacturers to configure an integral solution, practically a “turnkey” oil mill. The contract signed with The National Agricultural Development Company (NADEC) one of the largest agricultural production groups in the Middle East and North Africa. NADEC is the largest Organic Olive Oil producer in the Kingdom of Saudi Arabia and the Middle East, this project located in Al-Jouf target 5 million of organic olive tree in one single farm of 3000 hectares. This project is the fruit of the long and successful cooperation and relationship between NADEC Group and GEA Group in the food processes, especially in its branch of Dairy Products and the success of the first phase of the Project.

This second phase of the project is an expansion of the Olive Oil Plant installed successfully in the first phase in 2016. This new cooperation between NADEC Group and GEA Group includes civil engineering, automation engineering, processes and all the necessary industrial equipment. “We give to NADEC a differentiated and an integrated solution from the hands of a single supplier,” explains Rafael Cárdenas, head of the Center for Excellence in Olive Oil of GEA, based in Úbeda (Spain).

Once the construction process is completed, it will lead to the largest and most modern oil mill in Asia, which confirms GEA’s global leadership when it comes to projects of large-capacity olive oil factories.

The GEA Group generates close to 500 direct jobs in the Iberian Peninsula and has eight work centers in Spain and Portugal, located in important economic centers such as Madrid, Barcelona, Valencia, Huelva, Ubeda, Vigo or Lisbon. In addition, it is listed on the German stock exchange MDAX (G1A, WKN 660 200). GEA Iberia develops an intense activity throughout the year to improve the knowledge of the olive sector at international level and to organize and support training actions aimed at professionals in the olive oil sector.