Imports of olive oil and olive-pomace oil in China increased steadily. As regards the origin of imports, in the last crop year, 95% came from countries in the European Union. In the 2015/16 crop year, China produced 5000 t of olive oil, which is a 75% increase compared to the previous year 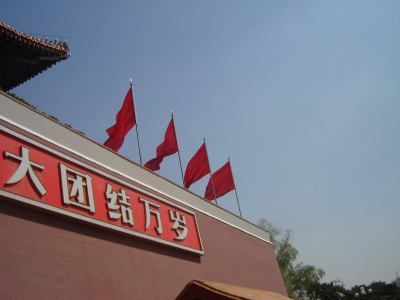 Imports of olive oil and olive-pomace oil in China increased steadily over the period 2001/02 – 2011/12 (graph 1), until they reached a maximum of almost 46 000 t in the 2011/12 crop year. Imports however then suffered year-on- year decreases of 6% and 15% in the 2012/13 and 2013/14 crop years. Now, though, everything seems to point to a recovery in the market. The 2015/16 crop year closed with a 12% year-on-year increase, exceeding 40 000 t. An analysis of monthly data (graph 2) indicates that the highest import volumes are recorded in the first months of the crop year (November, December and January) and that imports over the first seven months of the current crop year rose by 17%. 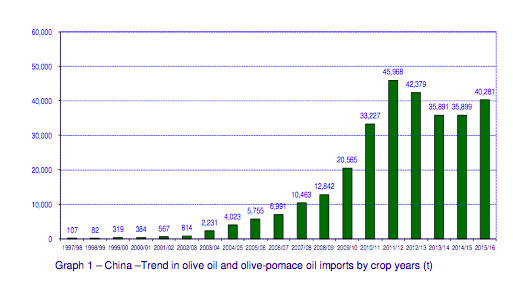 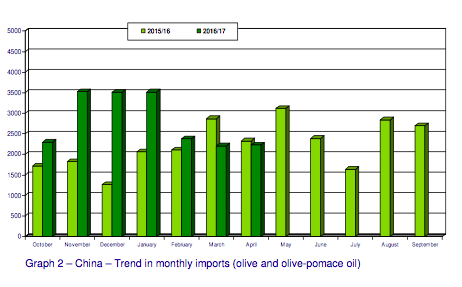 As regards the origin of imports, in the last crop year, 95% came from countries in the European Union (China is the EU’s second biggest agri-food market), where Spain took the lead with 80% of imports, followed by Italy with 13% and Greece with 2%. The remaining 5% came from Australia, Tunisia, Morocco and Turkey, which made up the total along with other countries. As regards the volumes of each product category, 77% of total imports came under the virgin and extra virgin olive oil category, followed by olive-pomace oil with 14% and olive oil with 9%.

A delegation of Chinese representatives of the science sector and the Chinese standardisation authorities attended the 49th meeting of the Advisory Committee, held on 18 May 2017, as observers and showed great interest in the adoption of the IOC trade standard.