This month we will be focusing on olive cultivation in Iran, a country that is a Member of the International Olive Council since January 2004 and which will be hosting the 47th meeting of the IOC Advisory Committee on Olive Oil and Table Olives and a regional seminar on quality, marketing and biodiversity, both scheduled to take place in Tehran on 16 and 17 May 2016 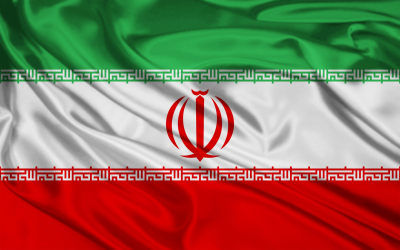 Iran shares many geographical features and historical roots with the Mediterranean countries, which are home to the major known cultivars of olive. Lying on the edges of the Eastern Mediterranean, it is the cradle of ancient civilisations and the possible birthplace of the olive tree. Much uncertainty surrounds the early history of olive growing in Iran although the olive tree is mentioned in ancient Iranian religious hymns dating back two thousand years ago.

The bulk of Iran’s varietal heritage is to be found in the valley of Sefi-Rud, Tarom and Manjil, some 60–70 km away from the shores of the Caspian Sea. Olive cultivars are distributed across the provinces of Gilan, Zanjan and Golestan in the North and Khozestan and Fars in the South. Some parts of Gilan (Loshan, Manjil, Rodbar, Aliabad, Jodaky, Vakhman, Bahramabad, Kalashtar, Koshk, Rostamabad, and Ganjeh) are the most important olive producing areas in the country. Most of the olives grown in Iran belong to 10 traditional cultivars: Mari, Zard, Rowghani, Gelooleh, Shengeh, Khormazeitoon, Khara, Dakal, Dezful and Fishomi.

The predominant climate is continental with cold winters and hot dry summers. On the plateau, the climate is arid and rainfall is less than 250 mm per year. Tehran, at the foot of the southern slopes of the Elburz Mountains, receives only 230 mm of precipitation whereas the coastline of the Caspian Sea receives more than 1 000 mm. The land is often cultivated on both mountainous terrain and elevations between 100 and 150 m above sea level.

Iran’s processing sector has been modernised in recent years, as can be seen from the statistics which speak for themselves. According to the figures available, in 2011 there were 49 olive oil mills, of which 31 were modern two- or three-phase facilities. Nowadays, there are 74 mills, 73 of which are modern plants; only one operates with presses or superpresses. The number of table olive processing plants has also increased, going up from 30 in 2011 to 200 at present. 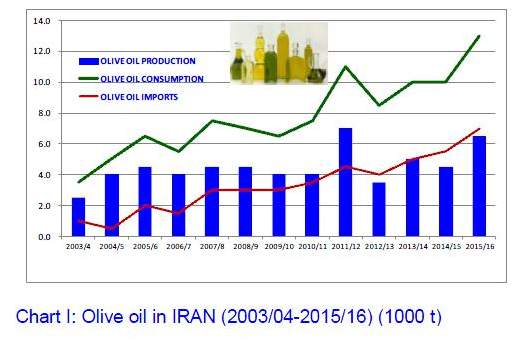 Although it oscillates from one crop year to the next, olive oil production in Iran expanded by 160 pc during the period reported in Chart I, rising from 2 500 t in 2003/04 to 6 500 t in 2015/16.
Over the last six seasons, production has averaged 5 000 t per year while consumption has been double that figure (10 000 t). The difference is met through imports, largely from Turkey, Syria, Spain and Italy. 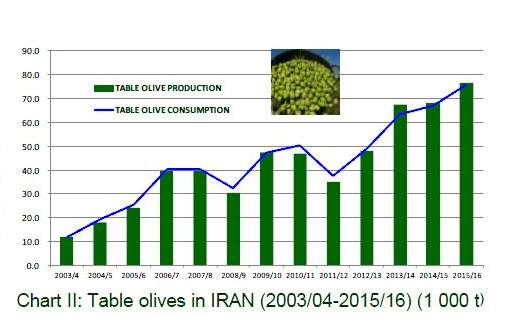