At the invitation of the Italian authorities, the 105th session of the Council of Members of the International Olive Council will be held in Rome (Italy) from 23 to 26 May 2017. Olive growing is an important agricultural activity in Italy, generating 3 151 million euros in the olive oil sector, and accounting for 2.4% of the value of agrifood production 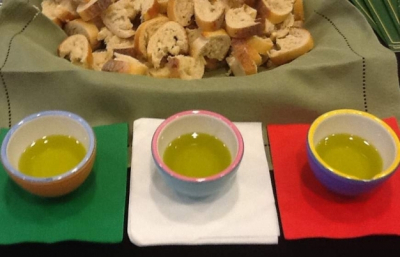 Italy was a founding Member of the IOC in 1956, and it has been present since the first Agreement on Olive Oil that established the Organisation in 1959, at the initiative of a group of countries (Belgium, France, Greece, Israel, Italy, Libya, Morocco, Portugal, Spain, Tunisia and the United Kingdom). It has participated actively in the successive international agreements on olive oil and table olives and in the working groups to monitor the activities of the Organisation, contributing renowned experts and researchers. Italy was one of the founding Member States of the European Union, together with Belgium, France, Germany, Luxemburg and the Netherlands. On 25 March 1957, it acceded to the European Union (European Economic Community). 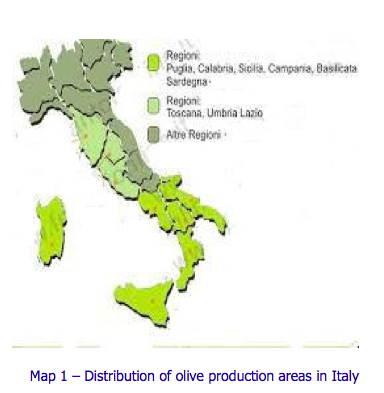 Italy has an olive growing area of 1 075 000 ha, of which 21% is irrigated while the rest is rain-fed. The most important olive growing areas are in the Apulia region, which accounts for 45% of the total olive growing area; Calabria (19%); Sicily (10%); Campania (7%), Lazio (5%), Tuscany and Sardinia (3% respectively), Basilicata and Umbria (2% respectively); with the rest of the surface area found in Molise, Liguria, Marche and Veneto. The classified organic area covers approximately 176 000 hectares, 16% of the national total. The region with the largest surface area is Apulia with 55 000 hectares, 32% of the national total and 15% of the total regional surface area covered by olive trees. The second region with the greatest surface area converted to organic farming is Calabria with 51 000 hectares.

In Italy there are over 500 varieties of olive trees and more than 90% of oil production is obtained from some 45 varieties. Eighty per cent of the production of olive oil in Italy is centred around three regions: Apulia, Calabria and Sicily, where the most widespread varieties are “Coratina”, “Ogliarola” and “Cellina di Nardò”, which are mainly found in the region of Apulia. The “Carolea”, “Cassanese” and the “Ottobratica” varieties are found in the region of Calabria and the “Biancolilla”, “Cerasuola”, “Moresca”, “Santagatese” and the “Tonda Iblea” varieties (the last two used for both oil and olives) are found in the region of Sicily. Other representative Italian varieties, which are mainly used for oil, are “Frantoio”, “Leccino”, “Moraiolo”, “Taggiasca”, “Canino” and “Dolce Agogia”. Varieties used for table oils grown in the regions of Sicily and Apulia are “Bella di Cerignola”, “Nocellara del Belice”, “Ascolana tenera”, “Giarraffa”, “Sant’Agostino” and “Santa Caterina”, which account for 70% of the Italian production of table olives.

Olive growing is an important agricultural activity in Italy, generating 3 151 million euros in the olive oil sector, and accounting for 2.4% of the value of agrifood production. It has some 5 000 oil mills, 10 olive oil refineries and 38 olive-pomace oil extraction plants. Source: Ismea.

Over the last five decades, the production of olive oil in Italy has followed an upward trend, which culminated at 879 000t in 2004/05, before entering a sharp decline down to 190 000 t, which was however not as low as production in 1990/91, which is considered the worst crop year with a production of 163 300 t. Production in 2016/17 is predicted at 190.000 t, which would be a 60% decrease compared to the previous crop year. Adverse weather conditions and olive tree diseases have led to a sharp fall in production illustrated in Graph I. 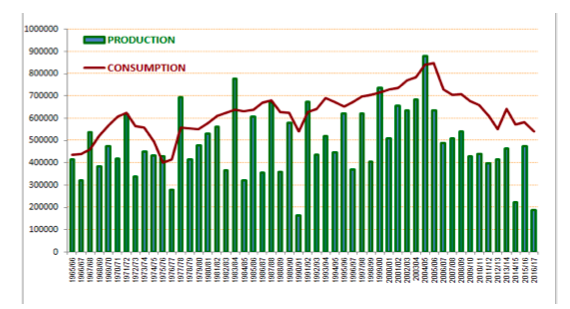 Graph II shows the average figures over the last five decades, with record average production and consumption figures of 611 220 t and 730 400 t in the 1995-2005 decade, respectively. The current average consumption per capita is 9.1kg/person/year. In terms of product type, in the 2015/16 crop year, 65% of production was extra virgin olive oil, 30% lampante virgin olive oil and 5% olive pomace oil.

In order to address some of the sector’s problems, the Italian Ministry of Agriculture has set out a programme of specific national and regional measures for the period 2016-2020, under the following five strategic objectives:

2. Supporting and promoting research to increase and improve the capacity of Italian olive orchards;

3. Supporting initiatives to promote “Made in Italy” products of a certified superior quality category, such as extra  virgin olive oil, through the promotion of the product on both the domestic and international markets;

4. Promoting the recovery of national cultivar varieties for table olives in new olive plantations that are entirely  subject to mechanised processes;

5. Promoting and supporting the economic organisation of operators in the olive oil sector. 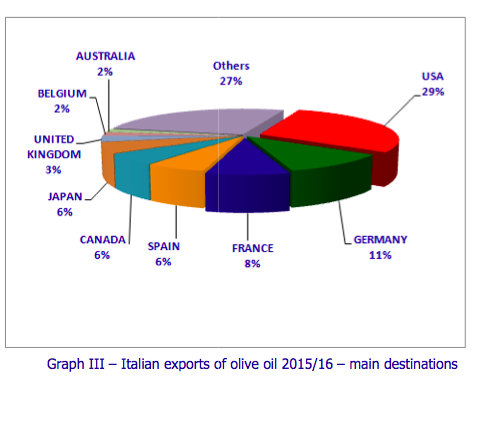 Italian exports of olive oil over the 2015/16 crop year increased by 5% compared to the previous year, reaching a total volume of 387 366.40 t, 60% of which are extra-EU and mainly destined to the United States, with 29% of total exports, followed by Canada and Japan (6% respectively) and Australia (2%).

The remaining 40% is accounted for by intra-EU sales. As Graph II shows, the destinations of these intra- EU sales are mainly Germany (11%), France (8%), Spain (6%) and the United Kingdom (3%).
As regards product category, 72% of total exports are of virgin and extra virgin olive oil, 16% olive oil and 12% are olive-pomace oil.