In response to the invitation from the Tunisian authorities, the 27th extraordinary session of the International Olive Council (IOC) will be held in Hammamet (Tunisia) from 11 to 16 July. Olive oil is a key export product given that more than 80 pc of local production is exported. Tunisia is the second exporter worldwide after the European Union 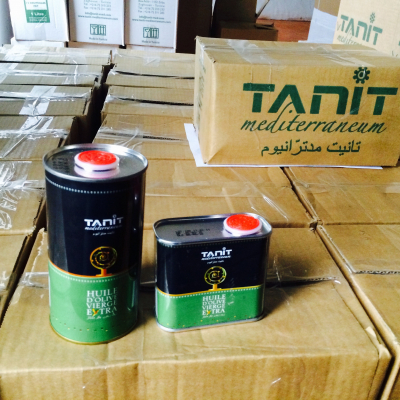 Tunisia, as a founding member of the IOC from its creation in February 1956, has participated actively in the successive international Agreements on olive oil and table olives and has contributed to all the working groups set up to monitor research and development and olive oil chemistry activities over the last 60 years. As one of the signatories of the first International Olive Oil Agreement in 1959, together with Belgium, France, Greece, Israel, Italy, Libya, Morocco, Portugal, Spain and the United Kingdom, Tunisia has the second largest olive-growing area in the world after Spain. Fifty years ago, Tunisia was using 800 000 ha of land for olive growing, which accounted for 16 pc of the world olive acreage. More than 99 pc of the production from Tunisian olive orchards is used for oil extraction, while the remainder is used for table olive processing. The country has more than 800 million olive trees, of which 35 pc are less than 5 years old; 54 pc are between 20 and 70 years old and 15 pc were planted over 70 years ago. Only 5 pc of the olive-growing area is cultivated under irrigation. 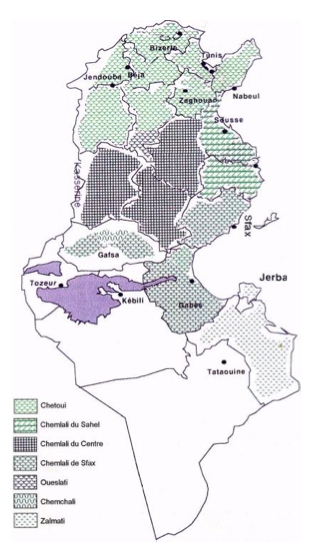 The main olive varieties in the north of the country are Chetoui, Sayali and Gerboui. The planting density in this region is of 100 trees/ha. The Chemlali and Oueslati varieties are found in the centre with a density of 50 to 60 trees/ha, while the Zalmati, Zarrari and Chemlali varieties are grown in the south with a density of 17 trees/ha (see map above).
Olive growing is one of Tunisia’s main agricultural activities. It plays a fundamental social and economic role, given that 60 pc of the country’s farmers work in this area and draw all or part of their revenues from it. Olive growing accounts for 30 to 40 million work days a year. It contributes to slowing down the rural exodus and generating revenues. The olive growing sector has a robust industrial infrastructure, with more than 1 700 olive oil processing facilities, 15 refineries, 10 olive pomace oil extraction units and more than 40 packing plants.

Over the last 50 years, the average production per crop year has gone from 79 000 t between 1965 and 1975 to more than 176 000 t in the last ten crop years (2005-2015), in particular as a result of a record production of 340 000 t in 2014/15. However, harvest fluctuation continues to be significant. Graph I shows large variations between crop years, which are essentially due to climatic conditions. More than 95 pc of the olive-growing area is rain fed and 70 pc of this area is located in semi-arid, arid or desert areas. 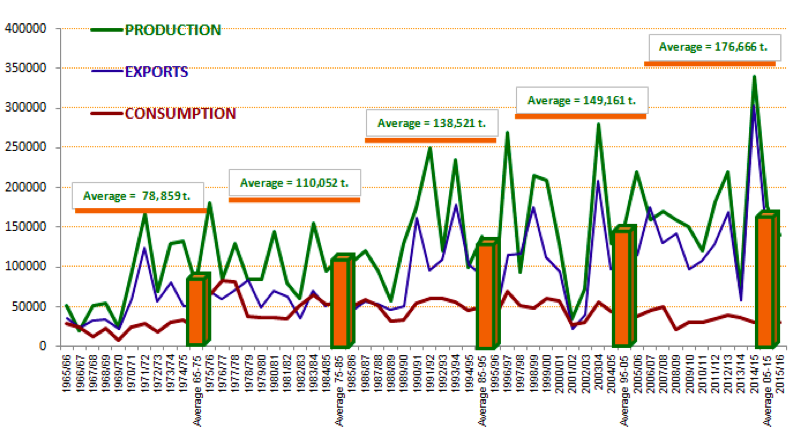 Graph I – Olive oil in Tunisia. Market trends over the last five decades (in tonnes)

Olive oil is a key export product given that more than 80 pc of local production is exported. Tunisia is the second exporter worldwide after the European Union. Depending on the crop year, it tends to take the third or fourth position in the ranking of global exporters, with the exception of the 2014/2015 crop year when it was first, having exported 304 000 t of olive oil, in particular to Spain (36 pc), Italy (32 pc), the United States (16 pc), France (4 pc) and Portugal (2 pc), as Graph II indicates. 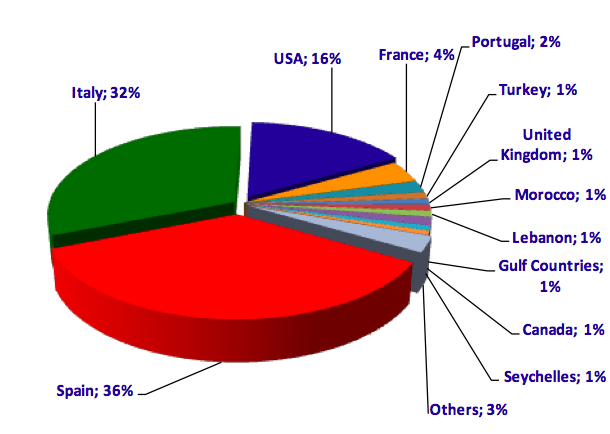