After last year’s disastrous season, this autumn’s crop should be extremely good. Although it is still early to accurately predict production levels and quality, the general outlook is positive 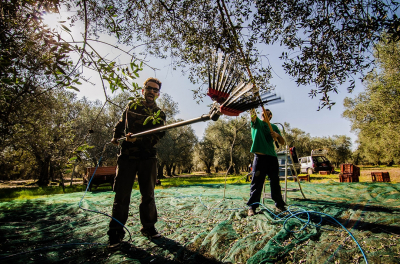 Italy had a disastrous season last year, the worst in many decades, which brought our olive farmers to their knees. The terrible crop was caused by devastating attacks of the olive fruit fly, and countless other factors, in part ascribable to negligence and underestimating potential risk factors. This year however, fingers crossed, the overall production should be more than satisfactory: the forecast is for 300,000 tonnes of oil, perhaps even more, if everything goes well from now until harvest time.

The quality of the olives is good, and extremely so in those areas considered ideal for this type of plant species. There is a general feeling of optimism, considering that this year everything possible has been done to reduce the risk of olive fruit fly attacks. The official alerts have been received and acted upon. Moreover the weather this year was most favourable and everything went well, with no problems from pathogen attacks. In irrigated olive groves, oil accumulation rates progressed well, and the larger drupes, weather permitting, should already be gathered in early October, although in Sicily, the region furthest south in our country, in some farms harvesting could already start in late September.

The initial prices of the olives should be high, because there are no reserves from last year. In Apulia, olives are already quoted at 75 euro per 100 kg. The final price however depends on how the crops evolve over the next few weeks.

Infestations of Xylella fastidiosa, which had caused so much alarm among the farmers, seem to have had little or no impact on plant productivity. On the contrary, the trees that were affected by rapid wilting have produced fruit of good quality. If it rains a little, it would be great, especially in the South of Italy, where olive groves are not irrigated. In a few weeks’ time, we will have a clearer picture, region by region.