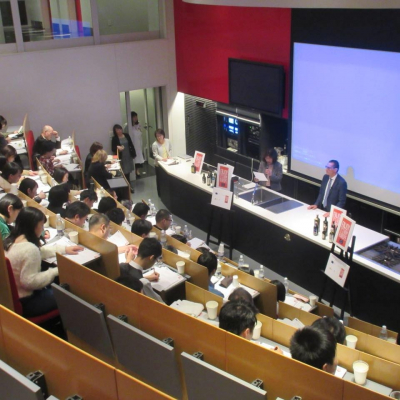 As part of the European high-quality extra virgin olive oils campaign supported by the European Union (EU) during the period from November 9th till 12th, in-store promotions took place in 3 cities in Kanto region including Tokyo, Yokohama (Kanagawa Prefecture), and Omiya (Saitama Prefecture). Simultaneously, staff training for quality control and providing technical and practical knowledge of extra virgin olive oil including quality control. All the activities were conducted by olive oil specialists from Italy and Spain and they provided and enhanced the knowledge of extra virgin olive oil including nutritional, unique flavor, health benefits, and storage methods.

Soledad Serrano López, a representative of QvExtra! International, one of the consortiums which is leading this campaign, said, “This is the first in-store promotion activity of the 3 year campaign. It was such a rewarding experience to see the Japanese people enjoy high quality extra virgin olive oils and know the difference. I would like to have more Japanese people to know about the nutritional, sensory and health benefits of extra virgin olive oils and use it in their daily life.”

During the training session, Maria Grazia Minisci, a producer and a representative of CEQ Italia, another consortium which is leading this campaign, also said that in order to deliver the high quality extra virgin olive oil in the best condition to consumers, it is important that those who involved in all the process from producing to sales understand well what extra virgin olive oils is and how to handle this delicate product.
“Since we received great feedback from the store staff, we would like to continue this activity in other regions of Japan such Nagoya and Osaka during the 3 year campaign”

The promotion and training details are as follows.

The high-quality extra virgin olive oil promotional consortium; Consorzio di Garanzia dell’Olio Extra Vergine di Oliva di Qualità (CEQ Italia) and QvExtra! International (QvExtra!) are mainly leading this campaign and striving to increase the awareness of the nutritional, sensory and health benefits of extra virgin olive oils of the highest quality though giving lectures for trainee chefs at one of the most famous cookery schools in Japan, offering olive oil special trainings for gourmet store staff including buyers and workers in the trade industry, and conducting in-store promotion with cooking demonstration for consumers at the local gourmet stores.

CEQ Italia is a non-profit organization which founded in 2001 to promote the culture of quality EVOO and provide correct information of EVOO to consumers as well as to protect and guarantee the quality of EVOO released on the market. There are currently 37 members though out Italy.

QvExtra! is a private non-profit organization which founded in early 2013 and aiming to promote EVOO on both a national and international level. It’s 44 member companies are all producers of EVOO.