People are choosing extra virgin olive oil for its health benefits. An increasing amount of information is being published on this product. Japan has closed its imports of olive oil and olive pomace oil for the 2016/17 crop year at 56 853 t, which is up by 0.2% compared to last year. Ninety eight per cent of total imports come from European countries. For the last four crop years, Spain has been in the lead with 59% of the total, followed by Italy with 37% and Greece with 1%. Trend in imports of olive oil and olive pomace oil in the japanese market 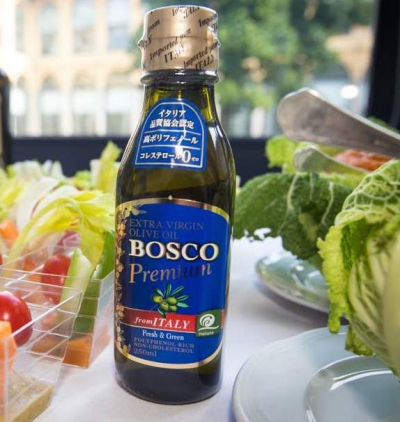 JAPAN has closed its imports of olive oil and olive pomace oil for the 2016/17 crop year at 56 853 t, which is up by 0.2% compared to last year. Graph I tracks the movements in this market, which saw a rise in import volumes as of the 1997/98 crop year, as a result of the promotion campaigns that the IOC began in 1991. Ten years later, imports underwent another significant increase, reaching their top levels in the 2014/15 crop year, at almost 62 000 tonnes. With the exception of some isolated troughs, steady growth has been seen over the years. 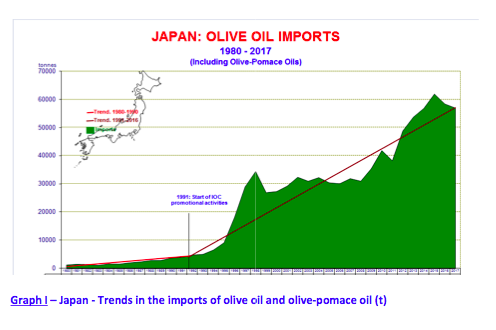 Japan is also a small producer with an olive acreage of approximately 500 ha, 85% of which is under intensive farming and 5% is under super-intensive farming, while the traditional system is applied to the rest.
Average production of olive oil stands at 30 tonnes. The varieties grown include Arbequina, Frontoio, Nevadillo, Manzanillo, Mission and Lucca.

Graph II tracks the distribution of imports of olive oil in the Japanese market by product category. The olive oil category in most demand is the virgin and extra virgin oil category, with 71% of total imports, olive oil accounts for 25%, followed by olive pomace oil with 4%. 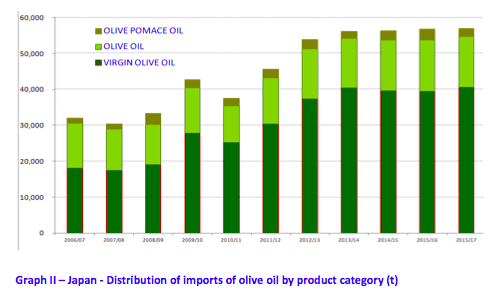 About consumption. People in Japan are choosing extra virgin olive oil for its health benefits. From being a product that was practically unknown owing to different eating habits, since the end of the Second World War, those habits have changed, and olive oil has come to be seen as a health product. Consumers have become more concerned by the idea of the “balanced meal” choosing, for example, salads dressed with extra virgin olive oil.

An increasing amount of information is being published on this product, moving from newspapers and magazines to websites. Recent research carried out in Japan, indicated that 90% of the women interviewed said that they knew of olive oil. This information is mainly a result of the promotion campaigns that have been carried out in this country.

The IOC started a promotion campaign in July 2015, running until February 2017, to inform Japanese consumers of the different categories of olive oil and raise awareness of the IOC standard. According to a study based on the survey conducted at the start of the campaign, there was some confusion regarding terminology. A survey conducted later on in the campaign, in December 2016, provided a different picture, showing that important progress had been made although the results also indicated that much could still be done. 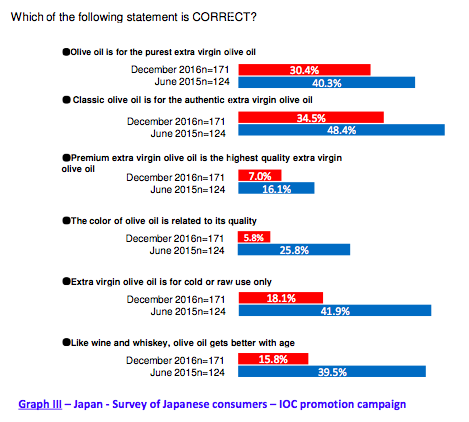 According to this survey, Japanese consumers are now better informed of the uses of olive oil. At the beginning of the campaign, 41.9% of participants in the survey said that extra virgin olive oil was only for cold/raw use, while at the end of the campaign the number had fallen to 18.1%.

The main factors influencing purchase decisions among consumers are “price” and “health”. The segment aged 20 to 40 is more aware of “price”, while the 50 to 60 segment gives greater importance to “health”. Young people in their 20s seem to pay more attention than any other segment to “taste”.

The first rise in the consumption of olive oil in Japan took place in 1997/98 (Graph I) and since then, the use of this healthy product has continued to grow, becoming increasingly familiar and known for its health benefits.
There is an increasing interest in quality and the application of the IOC standard to the Japanese market. The Japan Oilseed Processors Association (JOPA) has joined the IOC quality control programme and, as a result, two applications have been received for the recognition of laboratories: one from the Japan Inspection Institute of Fats and Oils (JIIFO), with the collaboration of JOPA, and another for the recognition of the panel of the regional government of Kagawa. In response to this, the IOC has run two training courses on olive oil tasting in the region of Kagawa and in Tokyo. 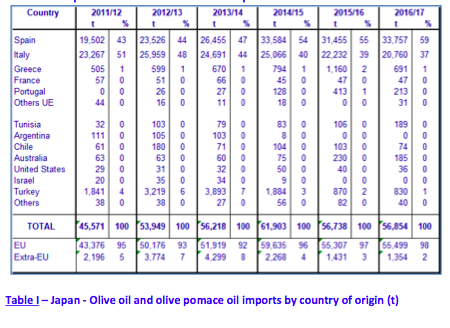 Returning with the analysis of the imports of olive oil in the Japanese market, Table I shows the breakdown of these imports by country of origin. Ninety eight per cent of total imports come from European countries. For the last four crop years, Spain has been in the lead with 59% of the total, followed by Italy with 37% and Greece with 1%. Over the last six crop years, Spain’s market share has increased by 16 points, going from 43% in 2011/12 to 59% in 2016/17; Italy’s share has fallen by 14 points, going from 51% to 38%; while Greece’s share has stayed the same. The remaining 2% is made up by the rest of non-European countries, mainly Turkey, although it lost three points over this period, falling from 4% to 1%.
Over the period detailed in Table I, imports increased by 25% going from 45 571 t in 2011/12 to 56 854 t in 2016/17.