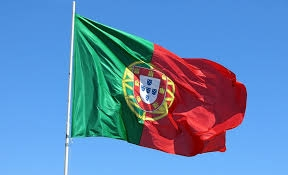 At the invitation of the Casa do Azeite, the Portuguese Olive Oil Association and the Portuguese authorities, the 49th meeting of the Advisory Committee will take place in Lisbon (Portugal) on 18 May 2017. Portugal is a founding Member of the IOC, since February 1956, and the first Agreement establishing the International Olive Council in 1959 at the initiative of a group of countries (Belgium, Spain, Greece, Israel, Italy, Libya, Morocco, Portugal, the United Kingdom and Tunisia). It has participated actively in all the international agreements on olive oil and table olives, as well as in the working groups set up to monitor the activities of the Organisation. On 1 January 1986, it joined the European Union and currently holds the status of a European Member State. 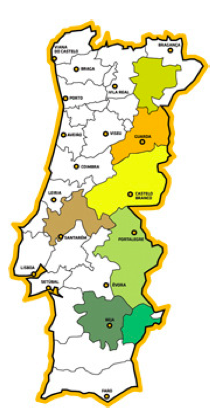 Map 1 – Distribution of the olive production areas in Portugal

The main olive varieties are the Galega Vulgar, which is the most common variety in Portugal, and the Cobrançosa, which is indigenous to the Tras-os-Montes region, even though it is found throughout the country. The Carrasquenha variety is mainly cultivated in the area of Alentejo, together with the Cordovil de Serpa variety; Verdeal and Madural are two varieties grown in the Tras-os-Montes area; and Cordovil de Castelo Branco is gorwn in the Beira Interior region. The varieties Maçanilha Algarvia, Negrinha de Freixo (Tras-os-Montes ) and Conserva de Elvas are the main varieties used for table olives.

It should be noted that since 2003/04 new areas have been planted in the Alentejo region, covering approximately 40% of the area, with varieties such as Arbequina, Arbosana, Koroneiki and Picual.
Olive growing is a significant agricultural activity in Portugal, generating €95.5 million and accounting for 1.36% of the value of agricultural production. The olive sector employs 1 431 people (1.6% of the agriculture and food industry total); it has more than 495 olive mills, 12 olive oil refineries and 17 olive pomace oil extractors.

Over the last five decades, olive growing in Portugal has gone through various different stages. From 1950- 1998 there was a move to replace olive growing with other crops, resulting in the ageing of olive orchards and generating high production costs, which triggered a serious crisis in the olive sector.

The year 1986, when Portugal became part of the European Union, marked the beginning of a period of modernisation in the sector, protecting olive orchards and providing incentives for the extension of olive growing areas. The trend, in recent years, has been one of modernisation, improvement in production procedures, planting of new intensive and super-intensive olive orchards, with a more productive profile through the modernisation of the traditional olive orchard (rejuvenation pruning, irrigation) as well as an increase in the transformation capacity of the olive mills. 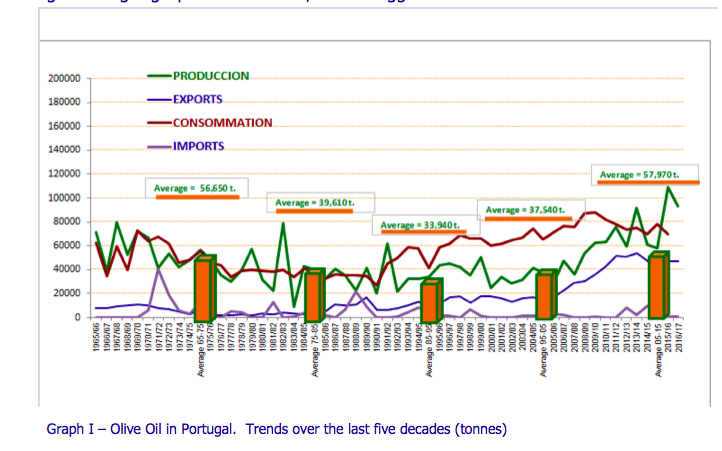 Portuguese exports of olive oil during the 2015/16 crop year increased by 8% compared with the previous crop year, reaching a total volume of 137 145.10 t, of which 69% were intra-EU sales. As graph II indicates, the destination markets of these intra-EU sales are mainly Spain, Italy and France.
The main destination of extra-EU exports is Brazil with 24% of total exports, followed by Angola (3%). 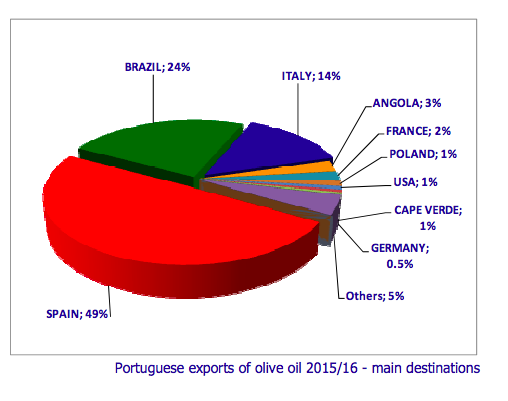