The value and unique characteristics of olives and olive oil have been acknowledged for centuries and are gaining even more prominence today. Cultivation of this noble fruit is concentrated in specific regions of the world, primarily in the countries bordering the shores of the Mediterranean. Turkey is one of those fortunate countries and is ranked as the world’s second biggest producer 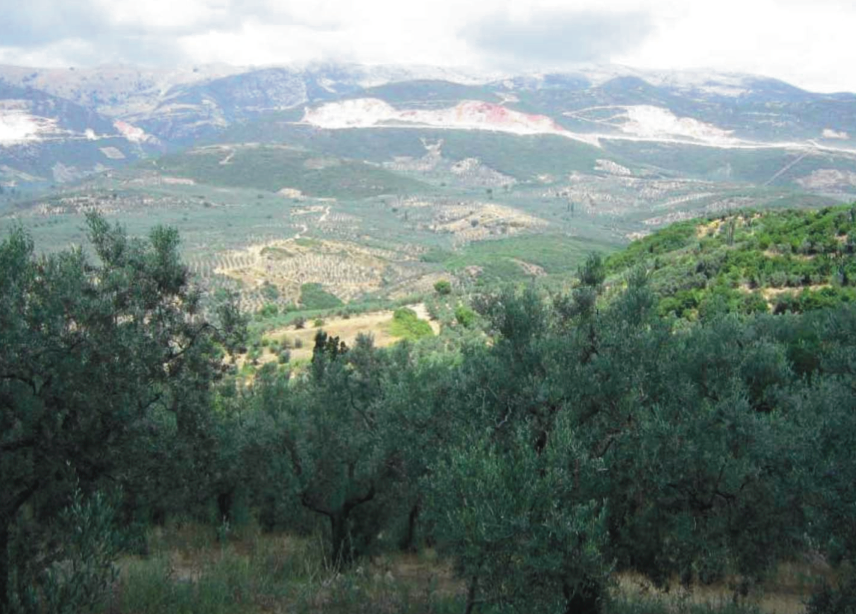 The olive has been a symbol of Mediterranean civi- lisation throughout history and has been long estab- lished in Turkey. In fact, south-east Anatolia is known to be the cradle and gene centre of the olive, a claim that is corroborated by subspecies of olive found in a line stretching from Hatay to Kahramanmaraş and Mar- din. From south-east Anatolia, this noble tree spread to west Anatolia, then fanning out to Greece, Italy, and Spain via the Aegean Islands.

The olive tree is commonly acknowledged to be the very first tree of all. It is mentioned in all the major sacred writings and has been used since 6000 BC, ac- cording to archaeological and geological findings. The first method of olive oil production was to crush the ol- ives underfoot and then extract the oil from the mash with hot water. The oldest olive oil facility, dating back to 600 BC, can be found at the ancient settlement of Klazomenai in west Anatolia, in the Urla district near the city of Izmir.

Like elsewhere around the Mediterranean, olive oil is a very important foodstuff in Turkey and takes pride of place in Turkish cuisine. In the early 2000s, Turkey had 100 mil- lion olive trees. By the 2014/15 season, new plantings in- creased this number to 169 million. On average, Turkey has produced 170 000 t of olive oil and 527 000 t of table olives over the last five crop years. Olive growing is concentrated around the towns of Aydın, İzmir, Muğla, Balıkesir, Bursa, Manisa, Çanakkale, Gaziantep and Mersin and in the re- gions of the Aegean, Marmara and south-east Anatolia. Turkey has a very rich heritage of native varieties. Gener- ally speaking, Edremit (Ayvalık) is the predominant variety in the north of Turkey’s olive growing area and Memecik in the south. The Gemlik variety is largely produced and con- sumed as black table olives. Other Turkish varieties include Büyük Topak, Ulak, Çakır, Çekişte, Çelebi, Çilli, Domat, Edincik Su, Eğriburun, Erkence, Halhalı, İzmir Sofralık, Kalembezi, Kan Çelebi, Karamürsel Su, Kilis Yağlık, Kiraz, Manzanilla, Memeli, Nizip Yağlık, Samanlı, Sarı Haşebi, Sarı Ulak, Saurani, Taşan Yüreği, Uslu and Yağ Celebi.

Although it is still largely limited to the olive pro- ducing regions, olive oil consumption in Turkey is increasing as people become more health conscious. Previously standing at 1.5 kg, per capita consumption has now reached 2 kg thanks to promotion showcas- ing the health benefits of olive oil. Consumers have also recently started to become more knowledge- able about the different olive varieties and the way in which olive oils can vary in taste according to their geographical origin. As a result, consumer demand for monovarietal olive oils is growing and there are more and more gourmet shops. These developments have had a positive impact on the image of olive oil, which is no longer perceived by consumers merely as a food staple but as a select product available in a wide range of variants: flavoured, cold press, early or late harvest, unfiltered, etc. As the understanding of the health benefits of olive oil has increased, so has con- sumer demand for cosmetic applications of olive oil, for instance in soaps and hand creams.

Olives and olive oil are also very important agri- cultural products and high-potential exports for the Turkish economy. There are estimated to be between 1000 and 1100 processing facilities in rural areas where some 1 million tonnes of olives are processed per sea- son. Export volume varies depending on the olive harvest and the level of production in other producer countries. Over the last five crop years exports have av- eraged 33 000 t.

Turkey’s Ministry of Food, Agriculture and Live- stock has fixed a target of 450 000 t for olive oil pro- duction. The increase in olive planting and the growing interest in olive cultivation, coupled with investment in modern orchard, production and storage facilities, all go to show that the sector believes this target can be achieved. If it does so in the short term, olive oil will gain in prominence at the domestic level and Turkey will consolidate its position as an international player in the olive world.

Olives, a feature of Turkey since 4000 BC

The value and unique characteristics of olives and olive oil have been acknowledged for centuries and are gaining even more prominence today. Cultivation of this noble fruit is concentrated in specific regions of the world, primarily in the countries bordering the shores of the Mediterranean. Turkey is one of those fortunate countries and is ranked as the world’s second biggest producer.

Over the past ten years, Turkey has made major pro- gress in olive cultivation. It has established processing plants with the technology and capacity to produce large volumes of top-quality table olives for the world market. It has also made impressive advances in olive oil production. A number of firms active in the extrac- tion, refining and packaging of olive oil to world stand- ards have taken up their rightful place in the industry and continue to pursue success. In the years ahead, Turkey intends to push forward with development and increase its share of global trade.

The following article has been written by the Ol- ive and Olive Oil Promotion Committee of Turkey (OOPC). OOPC is a non-profit organisation set up in Izmir in 2007. Its main objectives are to increase the efforts directed at foreign markets and to diversify Turkey’s export markets, as well as to implement pro- motional campaigns to establish the Turkish Olive and Olive Oil brand and image. The following websites can be visited to obtain more information regarding the ac- tivities of OOPC and the Turkish olive and olive oil sec- tor in general. (www.olivetolive.com, www.zztk.com.tr).

The history of the olive in Turkey

Anatolia, the crossroads of civilisations, has been home to the olive tree for 6000 years. The olive has brought peace, health and beauty to the region. It is the fascinating secret of the longevity of the Mediterranean peoples and bears delicious traditional produce that is shared by different civilisations.

Archaeological remains discovered at Urla, the site of the ancient city of Klazomenai in the Aegean region, testify to olive oil extraction as far back as the 6th cen- tury BC and recent discoveries have provided more evi- dence of early olive trading and exports in this city.

Further proof of the olive’s long history in Turkey is the 1300-year-old tree growing in Mut or the olive oil stores found in Izmir. The olive is mentioned in The Iliad, when Zeus extols the delights of a breakfast of mouthwatering types of olives savoured at thyme-scent- ed Gargara (Kücükkuyu), where the blue of the Aegean meets the green of Mount Ida.

This ancient city was one of the leading olive oil export centres in the 6th century BC.

Olive harvesting methods have barely changed for thousands of years and hand picking or beating with poles continue to be used. Another method is to col- lect the olive fruits that drop from the trees onto the ground. In Turkey, harvest takes place between Novem- ber and March.

Olives are a crop of major importance to the nation- al economy of Turkey and a nutritious foodstuff. The table olive industry is making breakthroughs at home and abroad. The recent construction of infrastructures employing new technologies, coupled with future ad- vances, will create opportunities for Turkey to be com- petitive and process any kind of olive in demand on international markets.

The olive tree and olives

The olive is a long-lived evergreen tree. It is densely branched and has a broad canopy that can be up to 10 metres high. With age, its smooth grey trunk gradu- ally starts to crack and become gnarled, and the canopy increases in width as the tree increases in height. It is a perennial tree and can live for approximately 2000 years. The canopy is open and symmetrical when grown on fertile land, but denser and rounded when cultivated on infertile land. Its shoots are grey and almost triangular in shape.

The olive tree blossoms in the spring. Stone harden- ing and fruit ripening begin in the summer months. The fruits start to change colour in NOVEMBER through to November, first turning from green to violet and then to black as they ripen. This stage is known as véraison. The ripe olives are harvested from NOVEMBER to Febru- ary. The quality of the olive oil produced is heavily de- pendent on how the olives are picked. The best olive oil is obtained when the olives are picked from the branch- es one by one. Other methods are to leave the olives to drop to the ground and then pick them there or to use suction machines. Olives should be processed as soon as possible after harvesting. If they are for olive oil extrac- tion, any leaves are first removed and the fruit is washed in automated machines. Then the olives are crushed in presses to extract the oil from the plant tissues. It takes approximately 10 kg of olives to extract 1 kg of early- harvest olive oil. With other methods, between 3 and 8 kg of olives are sufficient to extract 1 kg of oil.

Unlike other fruits, olives cannot be eaten straight from the tree. Various processes have evolved over time to remove their sharp bitter taste. At first, the olives were placed in water. Later, they were sweetened by dipping them in ash, vinegar or limewater. To preserve them, they were pickled in brine flavoured with lemon, fennel, mastic, thyme, peppermint and other herbs to make them more pleasant tasting. Alternatives to brin- ing were to store the olives in must, wine or even hon- eyed water.

In all, 84 olive varieties are produced in Turkey.

The way in which the oil is extracted from olives is another tradition that has not changed in millennia. The extraction method today is the same as six thou- sand years ago. The olives are merely crushed into a mash to which pressure is applied to extract the oil without any chemical processes. The oil is then sepa- rated from the fruit vegetable water. Technological developments in the early nineteenth century saw the advent of hydraulic presses, which are used nowadays alongside centrifugal systems, the most widespread of which is known as the continuous system.

In the continuous or fully automated system, the ol- ives are first sorted by variety, stripped of any leaves and crushed in a machine that finely grinds the olive stones at 3000 rpm. Water is added to the crushed olive pulp and the resultant mash is beaten. Next, the olive pom- ace is separated from the oily juice. The olive oil is then separated from the vegetable water and transferred to a filter tank. These kinds of olive oils are virgin or ex- tra virgin grade, depending on their acidity, and can be consumed straight away as if they were a fruit juice. The last sediment is removed and the olive oil is left in the settling tank. Virgin and extra virgin olive oil is then packed in drums, cans or bottles. The olive pomace left over from the extraction process is re-crushed and used to make soap, while the spent pomace is used to make fuel pellets.

To obtain quality olive oil, the olives must be pro- cessed as soon as possible after harvest. Quality dete- riorates if the fruit is left to lie. The olives must also be properly cleaned before entering the extraction process and olive oil must be stored properly.