“The 7th World Olive Oil Exhibition tends to be the Fair’s consolidation as the world’s reference for olive oil. The Gourmet Area – claims José Luis Murcia, the executive director of the exhibition – is an invaluable asset because it allows us to widen the gastronomic possibilities offered by such a delightful and versatile product as the olive oil. The trade – adds Murcia answering to our interview – is always the key objective of the Wooe, which concentrates its work on increasing business contacts among purchasers and sellers” 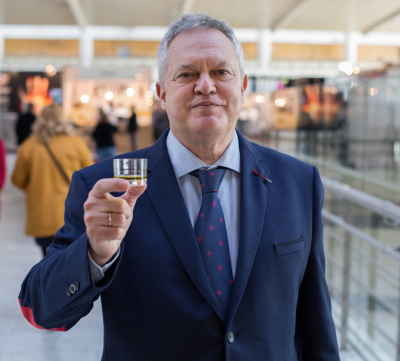 All the professionals who are involved in any way in the extra virgin olive oil sector, a symbol of the Mediterranean diet, should go to Madrid on the coming 21th and 22nd March. This important meeting can’t be underestimated. It is, in fact, the biggest and the most representative fair in the world, entirely devoted to olive oils. That’s why we decided to interview José Luis Murcia, the executive director of the exhibition, to know something more about it.

WOOE is increasingly successful as an exhibition. It has become international, by involving professionals of the industry coming from all countries. Am I mistaken, or has such an audience been attracted by useful focuses organized around extra virgin olive oil sensory profiling carried out by both the Olive Oil Bar, freely, and as master classes? The focus on oil/food pairings in the gourmet area have been extremely valuable, haven’t they?

The WOOE’s success is mainly due to the fact that it is far more than a fair. It is actually a world gathering to encourage business among buyers and sellers; and where there is a large amount of exceptional activities which include olive oil as the core and which qualitatively enhance the WOOE’s main objective: which is to boost and improve commercial transactions among the industry’s professionals. Undoubtedly, the increasingly growing importance of the different EVOOs’ sensory profile turns this exhibition into an even more appealing event. We work hard so that the masterclasses can be useful above all as a supplement to business. The Gourmet Area is an invaluable asset because it allows us to widen the gastronomic possibilities offered by such a delightful and versatile product as the olive oil.

– We feel that the product must be experienced directly, through tasting to qualify consumption. Without such a cultural approach, everything is only limited to price, but in this case value is taken out of extra virgin olive oil, which only becomes a commodity, subject to constant promotional pressure. Can the olive oil industry expect to have a better future than the current one in operating terms?

The EVOO is in itself a gourmet product, a delight on the palate. The fair, which hosts among its economic activity all segments of olive oil, increasingly highlights the most important expression of this product, which is the EVOO with all its varietal richness and its explosion of aromas and flavors. To a great extent thanks to the WOOE, we believe that in a near future a rise in EVOO consumption can happen; and also, a significant increase of the EVOO’s quality, a better presentation of the product and a greater added value for producers who take care when elaborating it.

– What’s next for WOOE seventh edition?

The 7th WOOE tends to be the Fair’s consolidation as the world’s reference for olive oil. Therefore, we are going to have activities such as the presentation of a research project, carried out by experts from all five continents, about the global situation of the olive oil industry; as well as meetings with the major world’s olive oil purchasers such as María Reyes, director of KeHe Distribution, or David Neuman, CEO of GAEA North America; in addition to a keynote conference about the evolution of packaging and commercialization, with a special emphasis on visual design, by the director of this publication, Luigi Caricato. All that in a festive but professional environment; because trade is always the key objective of the WOOE, which concentrates its work on increasing business contacts among purchasers and sellers.