Trends in US olive oil imports: bulk and packaged 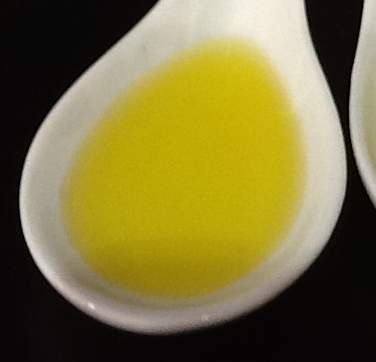 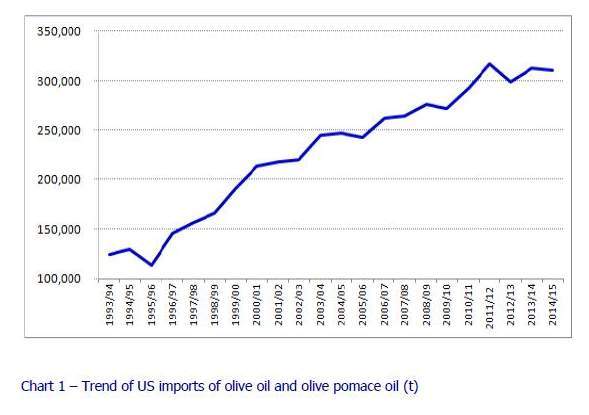 In this month’s issue we will look at how imports have evolved over time in terms of the grades of olive oil imported and container type. 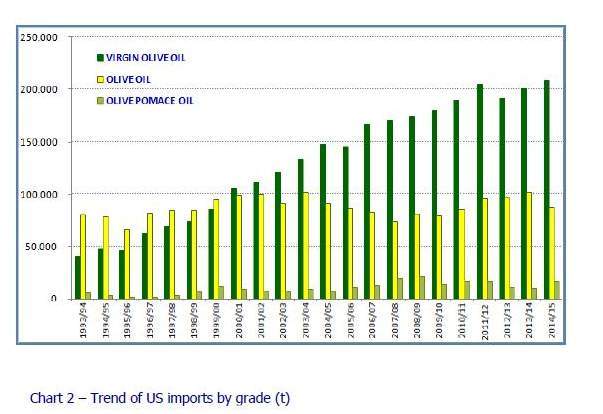 As mentioned above, 58.2 pc of the oil imported into the United States in 2014/15 was in containers 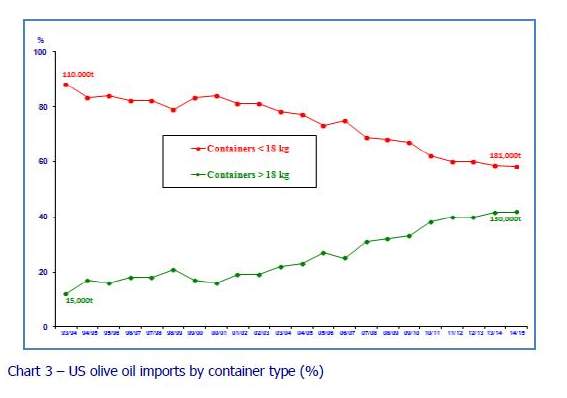 As can be seen from Chart 3, bulk-container imports have been winning ground from packaged product over the last 20 years. Italy leads the packaged market while Spain dominates the bulk market. In 2014/15, almost 42 pc of the olive imported into the United States was in containers > 18 kg, of which 19 pc was from Spain, followed by Tunisia (13 pc), Morocco (3 pc), Argentina (2 pc), Italy (1.6 pc), Chile (1.5 pc) and the rest of the countries. Virgin olive oil was the most popular grade for imports in this category of container (24 pc of the total, of which 17 pc extra virgin, 5 pc organic extra virgin and 2 pc virgin). Thirteen per cent belonged to the olive oil grade and 4 pc was olive pomace oil. Chart 4 plots the trend of US imports of the two chief categories of product – virgin olive oil (150910) and olive oil (150990) – by container size over the past 20 crop years. Notably, until 2001/02, packaged olive oil was in greatest demand (150990 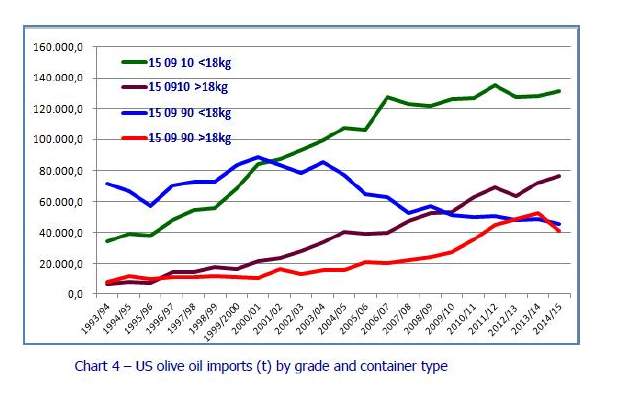 The five-season trend of US imports by country of origin and container size between 2010/11 and 2014/15 is reported in Table 1. The picture that emerges is a 17.9 pc increase in bulk imports, contrasting with a loss in bottled shared (−0.41 pc). The four top suppliers of packaged product by order of volume are Italy, then Spain, Tunisia, Greece and Turkey. In the bulk ranking, Spain is the leader, followed by Tunisia, Morocco, Argentina and Italy. Spain therefore clearly dominates the bulk market and is making inroads in packaged product, which is still led by Italy although it has lost ground in volume terms over the period reviewed.