World consumption of olive oil increased 1.8 fold in volume between 1990/00 and 2015/16. As can be seen from Chart 1, this upward movement has been located primarily in non-IOC member countries whose share of world consumption climbed from 11 pc to 24 pc between the start and end years of the reporting period. In 2015/16, the volume of olive oil consumed at world level looks set to be around 4.6 pc higher than in 2014/15 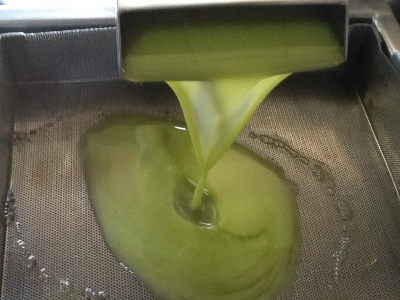 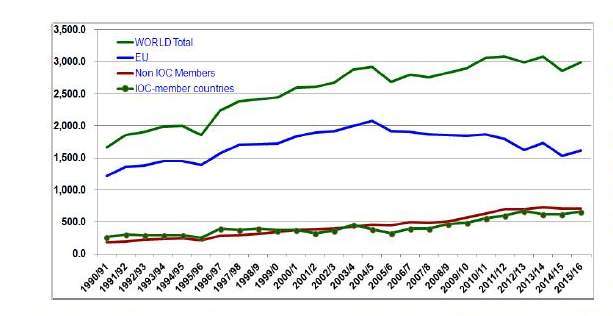 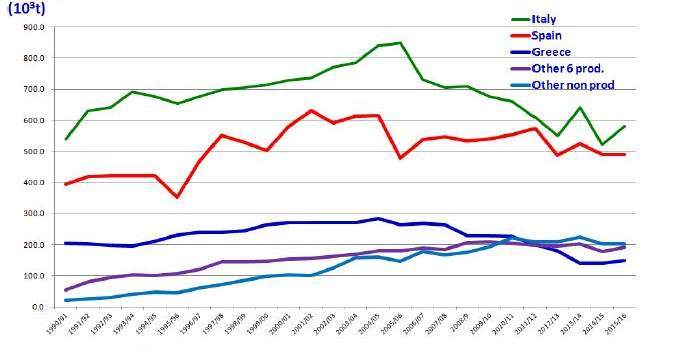 Italy continues to be the biggest EU consumer in volume terms, although its level of consumption started to decline heavily in 2006/07 until it fell to 520 000 t in 2014/15, the lowest level of the reporting period (however, this has to be viewed in the context of a past major debate on the representativity of its data). Spain, where consumption has always oscillated, has also seen a decrease since 2005/06 and the volume of consumption has never reverted to earlier levels. Greece, like Italy, has also seen its consumption drop (to 160 000 t). This decrease has coincided with the years of economic crisis and represents a fall of 22 pc compared with 20 years ago. 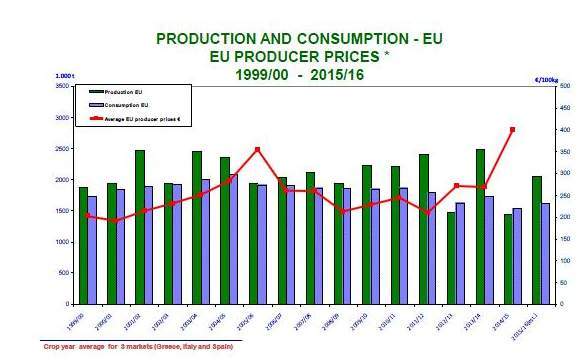 Chart 3 plots average production and consumption in EU producer countries relative to prices and shows sharp price growth in 2005/06 and 2014/15. In the latter season, EU production fell to an all-time low because of a combination of factors – the large fall in Spanish production induced by the severe drought and the poor volume of production in Italy, which felt the effects of the Xyllela fastidiosa infestation – all of
which led to general price rises and a fall in consumption.

Chart 4 shows world resources against producer prices for extra virgin olive oil in three representative markets of the EU – Italy (Bari), Greece (Chania) and Spain (Jaén) – where some 74 pc of the world’s olive oil is produced. Consequently, their market performance has an impact on prices in other regions of the EU as well as in other producer countries, especially on export prices.

Annual per capita consumption of olive oil in the EU countries in 2013 and 2014can be observed in Chart 5. Despite the decrease in total Greek consumption, Greece continues to lead the ranking with 12.8 kg, although this is lower than the previous crop year. It is followed by Spain (11.3 kg), Italy (10.5 kg) and Portugal (7.2 kg). Next come Cyprus (5.5 kg), Luxembourg (3.2 kg because of supermarket purchases by consumers from neighbouring countries), Malta (3 kg), France and Croatia (1.7 kg), Ireland and Belgium (1.4 kg) and Denmark (1.2 kg). In the rest of the EU members per capita consumption is split between the countries that consume between 1 kg and 0.5 kg per year (in descending order: Estonia, Czech Republic, Finland Latvia, Germany, Netherlands, Sweden, Slovenia, Austria and the United Kingdom) and those where it is below 0.4 kg (Romania, Poland, Hungary, Bulgaria, Slovakia and Lithuania).

Turning to the other IOC Members, consumption growth in recent years has been strong in Turkey and Morocco, where output has also risen, as well as in the Others group of countries. Consumption in Algeria has climbed in the second decade of the reporting period following in the footsteps of higher production, whereas in Tunisia it has fallen between1999/00 and2015/16.

Chart 6: Average trend of consumption (000 t) in non-EU Members of the IOC

In 2014, per capita consumption in this set of countries was lower than in the EU. It was 4 kg in Albania and Lebanon, 3.8 kg in Jordan and Tunisia, 3.6 kg in Morocco, 2.4 kg in Israel and Libya and1.4 kg in Turkey. Algerian consumption is much the same as in Denmark while in Montenegro it lies on a level with Germany and the Netherlands. As for Argentina, Egypt, Iran and Iraq, their consumption lies around the levels of Poland and Romania (Chart 7).

Chart 7: Per capita consumption in non-EU Members of the IOC – 2014

Among non-IOC Members, the United States has seen the most spectacular growth in total consumption over the last 25 years (Chart 8) even although U.S. per capita consumption in 2014 was only 0.9 kg, comparable to levels in the United Kingdom and Germany. 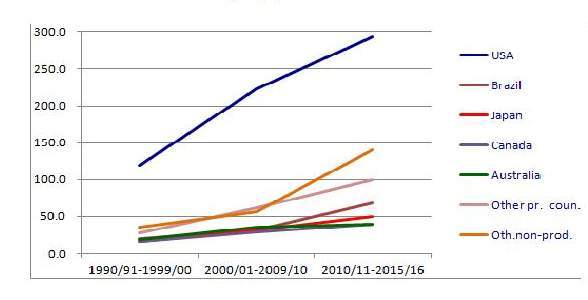 During the reporting period, total consumption likewise increased in the rest of the countries albeit on a much lower scale. As for per capita consumption in non-IOC countries, Chart 9 shows figures of 1.6 kg for Switzerland and Australia, 1.1 kg for Canada, 0.8 kg for Norway and 0.7 kg for Saudi Arabia. Elsewhere, per capita levels are lower.

The resultant picture shows room for consumption growth in the leading importing countries like the United States, Brazil and Japan. China comes last in the per capita ranking of the countries reported in Chart 9.