The Mediterrean heart of olive oil

It ended in Morocco, after three days entirely devoted to olive growing and olive oil processing technology, the seventh edition of the Olive tree Mediterrean Days in Meknès, organized by Agro-pôle Olivier, the Ecole Nationale d'Agriculture de Meknes, in collaboration with the International University of Andalusia. The initiative highlighted all the innovations, as well as the most recent projects, in olive oil sector. 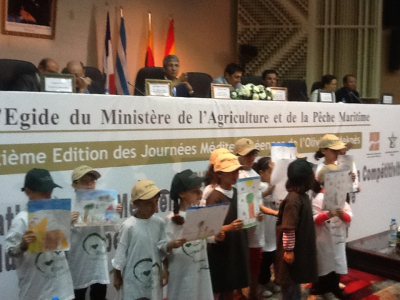 The program was very rich and dealt with everything that was possible to deal with, from every point of view, providing an international overview, especially taking into account that various experts of many producing countries from the Mediterranean area have been involved.

The presence of many speakers in Meknès, representing Europe, Spain, Italy, France and Greece, as well as Morocco and Tunisia for Africa, and Saudi Arabia for Asia, gave birth to an idea of ​​olive growing open to a variety of situations and contexts.

What emerged was that the consumption of olive oil is expanding rapidly, due to the high healthy value that consumers attribute to it everywhere in the world. From this point of view the report by Eduard Escrich, from University of Barcelona, on the important role of olive oil in the prevention from cancer had a large following. Next to this driving force, resulting from the healthy function granted to olive oils, a new scenario opened wide. A baseline scenario which, until a few years ago, no producing country had ever seen in its full value, namely the explanatory power of differentiation or the complex multi-sensory identity of the oils.

The growing attention to olive oils therefore require the sector to take another step forward nowadays, especially in those non-European countries of the Mediterranean in which there is a strong need to characterize these oils by introducing, as in Europe, certificates of origin, and thus protect and preserve the best oil producing areas.

During the olive tree days in Meknès, Spain, in close collaboration with the Agri-pôle Olivier, has contributed more than anyone to give the guideline for the very rapid progress that these Mediterranean countries are now making and carrying through very quickly and convincingly. This is a common way of thinking that ties all the open-minded producing countries, without any prejudice so far and regarding each type of innovation: the aim is to acquire very quickly new knowledge and technology.

In Meknès there were people of all ages but mostly young people. They seemed eager and skilled to learn, in order to quickly reach the goals of a project in a big way.

People I met in Meknès had a very clear idea of future programs. The oils on display in the lobby of the large conference room testify Morocco’s vocation for quality olive oil. During the event I tasted the oil produced in the mill of Agro-pôle Olivier: an extra virgin olive oil with fruity, vegetable, round and harmonious taste, with good fluidity and multisensorial elegance. I also visited the oil mill of Agro-pôle Olivier and I was both surprised and fascinated not only by the cutting-edge technology, but also by the beauty and functionality of the building itself, used as a “grinding unit”, as stated on the label, on the front of the oil mill. A pure architectural gem and, a few tens of meters away, another building with a well-equipped tasting room. The Moroccan oil sector thinks big and is led by a skilled manager, Noureddine Ouazzani; he deserves a public praise for his ability to unite different peoples and different cultures in order to grow olives in the name of production of quality and at the same time environmentally friendly.

Italy was represented by Luigi Caricato, director of Olio Officina, media-partner for the event of Meknès (soon we will publish the full report), by Cesare Buonamici, who described olive organic farming in Italy and the project “Oleo salus sistem” and by Professor Angelo Cichelli, from the University of Pescara, who focused on the management and utilization of by-products, reporting what is being carried out in Italy over the last few years.

We want also to highlight the important role of the International University of Andalusia, a proof of how Spain has much at heart olive growing and olive oil processing technology. One country much united and compact, with aremarkable driving force.

Finally, amongst all, I think it is important to highlight the very interesting and suggestive report by Ibrahim Saboumi, from the Al Jaouf University of Saudi Arabia. Even in this case it was central to Saudi Arabia the role played by the University of Andalucia. The two universities came in fact to an agreement with three goals. The first: consulting service. The second: business education. The third: research activity. The interest in olivegrowing is clear, they are already at work to create a center of olive growing, by will of the king and of the ministry of education and agriculture. In short, the millennia pass, but attention for the cultivation of olive trees never comes to an end.