The golden rules for deep-frying

Is fried food good or bad for our health? The answer depends on how it is fried. It is always important to follow the rules for deep-frying. Here are some tips from a biochemist, Dr. Bruno Berra, and a nutritionist, Dr. Samantha Biale 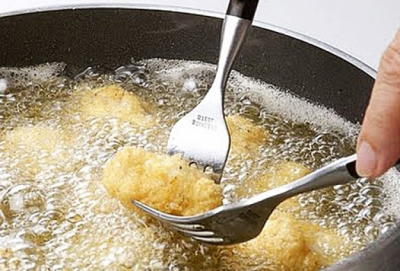 The golden rules for deep-frying are listed below, and it is important to follow them scrupulously. The best oil? Extra virgin olive oil, without any doubt, followed by olive oil and olive-pomace oil. As regards seed oils, the best, from a nutritional point of view, is peanut oil.

THE GOLDEN RULES FOR DEEP-FRYING

– Remove all traces of water from the food, thoroughly patting it dry with a paper towel.

– The food should be cut to the same size, so that all the pieces can cook in a uniform manner.

– Moisture-rich food such as aubergines, zucchini flowers, mushrooms, and fish, both whole and filleted, should be coated with flour or breadcrumbs to protect it from the scorching oil and prevent the water from contaminating the oil.

– Never add salt to the coating, as the salt will draw moisture to the surface of the food, preventing a crust from forming, and thus letting the oil seep into it.

– Always use a generous amount of oil: the food should float on its surface comfortably.

– When food is plunged into the pot, the heat should be raised so that the oil can rapidly return to its original temperature. After about ten seconds, the heat can be lowered again, so that the temperature of the frying oil remains more or less constant.

– The food should never pile up inside the pot: too much food would cause the temperature of the oil to drop, but it is also important that each piece have enough space to release its moisture by evaporation.

– Use a deep fry wire skimmer to remove the food from the pan, so that only the minimum amount of oil is retained.

– After removing it from the hot oil, the food should be placed on a paper towel to eliminate excess oil. Never place the pieces of fried food one on top of the other or cover them with kitchen paper, else the moisture will not evaporate properly and will condense on the surface of the food, making it soggy and unappetizing. Moreover, under these conditions the paper towel cannot remove any excess oil still present on the surface of the food.

– If you have a deep fryer, follow the instructions carefully, looking after it properly and keeping it clean. Only with a fryer is it possible to re-use oil, but not more than twice, and only after straining it through a fine mesh or filter. This is because the frying compartment of this appliance is usually divided into two areas, the hot zone where the food is fried and a smaller cold zone beneath it, into which food particles sink, so that they don’t scorch and pollute the hot oil.
Industrial fryers operate at much higher temperatures and for longer periods of time: in this case, the best oil to use is palm oil, which has a very high smoke point (240° C). All the rules listed above are also valid at an industrial level, and should be followed scrupulously.