It's a revolution in the language, which calls into question the idea that each of us has of olive oil. A syncretism of languages and styles that is renovating the entire sector, spurring us to reconsider and reassess the role of extra virgin olive oil 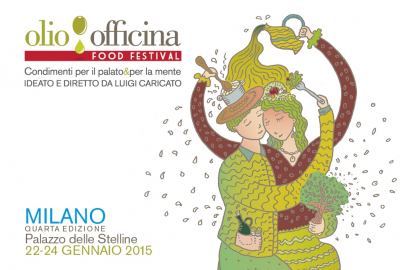 It is only a question of time. Early September witnessed the official presentation of the fourth edition of the Olio Officina Food Festival, the biggest and most original event focusing on olive oils and other condiments.

This festival, created and directed by oil connoisseur Luigi Caricato, is scheduled from January 22 to 24, 2015. The venue, as usual, is the Palazzo delle Stelline in Milan, Italy. There is however one difference: as well as the customary January appointment, Olio Officina will also organize other meetings in the Lombard capital throughout the year, in view of the upcoming Expo 2015.

The central theme of this year’s festival is “oil nourishes love”, and this concept will lead us through a vast and composite cultural landscape that is still unknown and unexplored. In view of the great success of the previous editions, our aim of changing the traditional idea of oil is rapidly gaining momentum, reaching a wider target of people with more open minds. Hence, after tackling the new languages of oil (2012), the feminine side of oil (2013) and the social soul of oil (2014), and theorizing the concepts of “democratic oil” and “oil as a common, sharable good”, now is the turn of a rather unusual theme, which possesses however an interesting historical background: the erotic aspect of oil (2015). The idea is to show how an ancient product such as olive oil, known to Man for over six thousand years, should be considered and used not only as a condiment, but in a more ample manner, involving every language and interlocutor.

The Olio Officina Food Festival – Condimenti per il palato & per la mente (Condiments for the palate and the mind) not only features people who play a more traditional role in the olive oil sector – olive growers, millers, agronomists, oil connoisseurs, food chemists and technologists, tasters, packaging managers, oil merchants, distributors, retailers, restaurateurs and chefs – but also other, more unexpected and surprising figures. Hence our attention must turn towards a wider audience, people who cannot be merely labelled as end users or consumers, but deserve greater appreciation, and we must find novel ways to show them how much we care.

“In recent years– confirms Luigi Caricato, director of the event– a multitude of new, alternative figures has come to this Festival and here they were given the opportunity to freely express their opinions on such topics as oil, olive trees, landscapes, the economy, art, literature, music, medicine, architecture and many other anthropological and philosophical sectors. Their contributions have often challenged our views and created a lot of turmoil. It’s a revolution in the language, which calls into question the idea that each of us has of olive oil. Such a syncretism of languages and styles is renovating the entire sector, spurring us to reconsider and reassess extra virgin olive oil. A more modern view of it will consequently change its image and nature. It must no longer be merely considered a consumer good, because olive oil is a powerful cultural indicator, and always has been, for the last six thousand years”.