Olive oil seen as never before

The fourth Olio Officina Food Festival has just ended and already the organizers are working on next year’s edition, which will take place in Milan from January 21 to 23, 2016. The theme chosen is the future, hence the name “Avant-garde, the oil of the future and the future of oil” 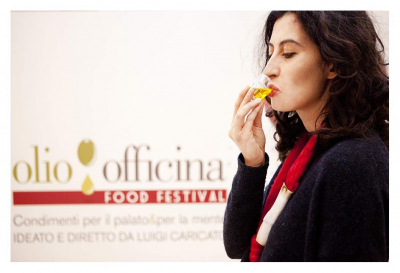 Oil, with its important past, covering over six thousand years of human history, needs to be revisited and reconsidered from a new perspective, which can take into account a multitude of disciplines and forms of knowledge. This type of approach explains the continuous success of a cultural event whose chief protagonist is olive oil. This festival, the brainchild of oil-specialist Luigi Caricato, is held every year in Milan, Italy. The next edition, scheduled for January 2016, will focus on the future. Doubtlessly a serious issue, these days.

Meanwhile, if we look back at last January, we can claim in all fairness that it was a wonderful event. The three days of the Olio Officina Food Festival were extremely successful, and we are looking forward to next year’s edition, which will take place from January 21 to 23, 2016.

Milan, the financial capital of Italy, famous world-wide for its fashion shows – as well as for being the city hosting the 2015 Expo, from May 1st – is the ideal setting for this event. Olive oil as usual is the star of the show; however, all other condiments were close seconds. Not by chance is Luigi Caricato’s festival dedicated to the “condiments for the palate and the mind”, as its full name clearly states.

The theme of the 2015 festival was a surprising and unusual one: “Oil nourishes love”. Many were the contributions made in this direction. Some of the most enticing aspects of the Olio Officina Food Festival are the themes it deals with, which always involve domains and disciplines that are usually quite foreign to the world of olive oil. Each year members of different professions flock to this event. Not only is it attended by oil-specialists, olive farmers, millers, agronomists, nutritionists, chemists, biochemists and medical practitioners, but also archaeologists, architects, anthropologists, philosophers, pedagogues, novelists, poets, actors, film and play directors, geographers, landscapers, and many more. Each and every one of them giving their personal contribution to the world of oil.

There will be many novelties at the 2016 festival, where oils from outside our country will feature prominently. There is already a lot of musing about next year’s Country of Honour. You will soon discover. Meanwhile, please feel free to send us your picture or ideas regarding the oil of the future.