The future of oil

The fifth Olio Officina Festival, taking place in Milan from January 21 to 23, will be avant-garde. Being avant-garde means being at the forefront, in front of everybody before anybody else, hence becoming a guide and leader. Often we fear the unknown, but as we should all know, the future provides nourishment for tradition. Among the novelties of next year’s festival there is a sector devoted to books on gastronomy, agriculture and the environment 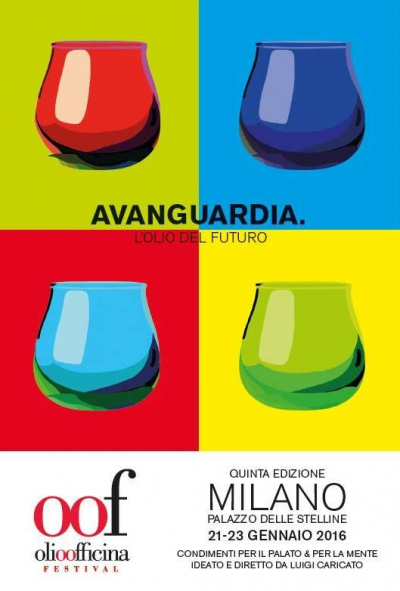 The first novelty that catches the eye is the name. This year’s event, which will be held as usual in Milan, will be called Olio Officina Festival: the word Food has been removed. The reason for this is that nowadays, food is a much-abused term, and I wished to put the focus on oil and the festival. The logo too has changed: it is now more essential, and the olive and drop of oil are no longer there. Soon we will also change the festival’s website (olioofficina.com).

Change is always necessary, and almost inevitable. This is why the 2016 festival, created by oil-specialist and writer Luigi Caricato, will host another event, entirely devoted to books on food, agriculture and the environment. The festival’s subtitle, Condiments for the palate & the mind, remains unmodified.
The theme of the fifth Olio Officina Festival is “Avant-garde. The oil of the future”. “I chose this word, avant-garde, to make a link with the artistic and literary movements in the early Twentieth century bearing the same name, and whose works expressed audacity and innovation, hence identifying and creating new trends, with their cutting-edge designs and inventiveness.”

“The focus is entirely on the oil of the future – explains Mr. Caricato – and not on the future of oil. The idea is to revolutionize the language that we are used to, hence changing our personal vision of oil. This will lead to innovation, and new interpretations of it. There will be an element of rupture with the past, but the past won’t be recanted. What truly matters is thinking outside the box, moving forward and opening new doors.”
“Being avant-garde – adds Luigi Caricato – is of the utmost importance, especially nowadays, when the oil sector is still rather clannish and in certain cases even static, incapable of looking forward. Being at the forefront also means being in front of everybody before anybody else, hence becoming a guide and leader. The future provides nourishment to tradition. We are deeply mistaken if we believe that safeguarding tradition means leaving things unchanged.”

The picture of the four glasses is the emblem of the festival. “Like every other year, we choose an image for the festival, which appears on all our official documents and press releases. We also print postcards of it, so as to promote the festival far and wide. Many are the pictures and images somehow related to the festival that appear on social networks and other media. There is only one emblem however, and this year’s is a Warhol-like picture created by Valerio Marini depicting the vessels used to sample olive oil. Since this glass is still largely unknown, we have decided to bring it into the limelight, portraying it in various shades of colour. People gaze at the picture with utter bewilderment: it is easy to guess that is some sort of a glass, albeit of a peculiar shape, a chalice without a stem. Curiosity spurs interest, people want to know more about it, and we are getting an extremely positive feedback from inside and outside the circle of oil connoisseurs. Milan is an extremely important centre, it is the engine and driving force of both the economy and culture in Italy. All new trends pass from Milan, and there are great expectations for our appointment on January 21 to 23. We will soon provide more details of the programme.”