Following is a brief guide to the most common terms regarding vinegar. An indispensable glossary for whoever wants to enter into this fascinating but little-known world 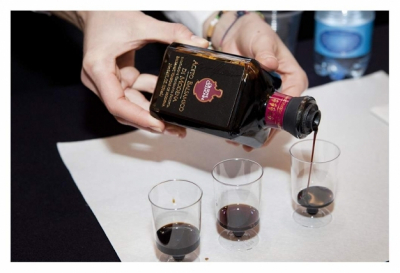 When preparing this text we tried to keep the language simple, and make it accessible to all. This useful glossary explains a few technical terms and will hopefully clarify the more complicated aspects of vinegar production.

AAB (Acetic Acid Bacteria): Any of the genus Acetobacter bacteria responsible for the acetic fermentation of an alcoholic liquid such as wine; they oxidize ethanol and contribute to forming the so-called mother of vinegar.

“Acetaia”: a term typical of the balsamic vinegar production zone (Modena and Reggio Emilia, Italy), indicating the rooms where the vinegar is produced and aged; these rooms possess the ideal conditions of temperature and aeration for the processes of acetous fermentation, maturation and ageing.

Acetous fermentation: the process by which AAB trigger a series of chemical reactions, transforming an alcoholic solution into acetaldehyde first and subsequently, acetic acid, to give what is commonly referred to as “vinegar”.

Acidic: the sharp, biting sensation perceived by nose and mouth that is typical of vinegar, and all other substances that have undergone acetous fermentation.

Body: tactile sensation perceived in the mouth defining the degree of density, viscosity and consistency of the vinegar.

Flavour: the range of sensations perceived in the mouth and by the nose, which determine the sensory quality of the vinegar, with all its positive and negative traits.

Flavouring: the addition of specific, aromatic compounds to enrich the natural flavour of vinegar. Flavouring with herbs or spices is carried out by infusion or with the addition of up to 5% extracts.

Fragrance: the crisp, pleasant scent perceived when tasting the vinegar.
Mother of vinegar (or simply mother): a slimy membrane that develops on the surface of alcoholic liquids undergoing acetous fermentation. A bacterial culture that is employed to accelerate the fermentation process.

Organoleptic: relating to the characters and qualities of a vinegar that are perceived by the sense organs upon tasting. Examples of organoleptic features are: glossy brown colour, pungent scent, bittersweet flavour.

Oxologist: vinegar expert or connoisseur – from the Greek oxos, vinegar. A qualification corresponding to that of the oenologist in the wine sector.

Pasteurization: industrial process during which vinegar is heated to a temperature that kills harmful germs and then cooled quickly. The vinegar is thus protected from the attacks of all pathogenic microorganisms and enzymes.

Shavings: thin slivers of beech, fir, pine or other resinous wood that are added inside the barrels to boost acetous fermentation. When making vinegar at home, it is more common to add pieces of bread.

“Vaselli”: the Italian term for the casks forming the barrel sets used for aging balsamic vinegar. Each cask of the set differs in size and wood type, so that over the entire maturation process the vinegar can take on some of the aromatic compounds of the different woods.