In Italy, and more precisely in the countryside surrounding Nesente Valpantena, near Verona, the feather in the cap of this ancient oil-making family is an extra virgin oil of which only very few bottles are made, because it is produced from a variety of olives growing only in a very limited territory. A unique and truly-deserving sensory experience. 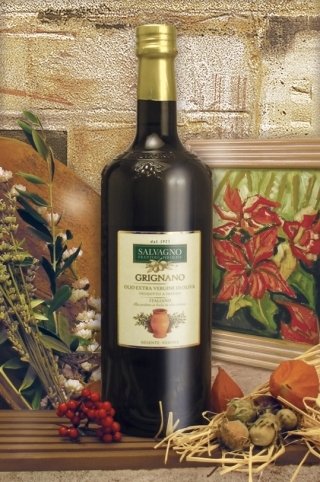 In the past, when very little was known about olives, all oils were considered the same. There were no distinctive elements, or at least, none that could be detected by the general public.
Many years have passed since then. Now, after all the great efforts made to highlight and communicate the goodness of oil, the consumers have accepted the producers’ invitation to savour oil, smell its scent, and are even starting to sip it directly from a glass or spoon. Olive oil by itself, a monad, something that can be appreciated per se, and not only as a dressing. New and unusual oils appeared on the market, such as oils made from processing Grignano olives. Who would have ever said that one day we would have had the opportunity of savouring such an oil, made only from olives of this variety. 100% pure.

Grignano, also known as Grignan, is an olive tree cultivar originating from the Gargnà variety, with a good, constant yield. It is not very hardy, grows in a semi-pendulous form, and has a rather scarce canopy. This cultivar produces a large, egg-shaped olive yielding rather poor amounts of oil that are however very rich in oleic acid.

An unclouded oil of a golden yellow colour with greenish hues, it has a light vegetable perfume, with clear notes of olives and more delicate touches of herbs and vegetables. The flavour is delicately soft, with hints of artichoke and meadow grasses. Bitterness and pungency are well balanced. Harmonious and pleasantly fluid in the mouth; a slight pungency and a note of almond emerge at the end.

I have written extensively about Grignano oil because it is still largely unknown, due to the fact that this variety of olive tree is only cultivated in a very limited territory. Oils like this deserve to be better known for their unique sensory features, and I can assure you that this one in particular pairs incredibly well with many dishes.

I had the opportunity of savouring it with the following: