Mechanics of the infinitely small: NanoGear, towards a molecular gear

Oscillatory and rotational motions of different parts are combined in a newly conceived artificial molecule, paving the way for the construction of devices capable of transforming and transmitting movements on the nanometer scale. The nanodevice was designed, synthesized and tested by a team of researchers of the University of Bologna led by Massimo Baroncini and Alberto Credi. This is a result of the Center for Light Activated Nanostructures (Clan), a joint laboratory between the University and Cnr Isof in Bologna. The study is published by the prestigious journal Chem 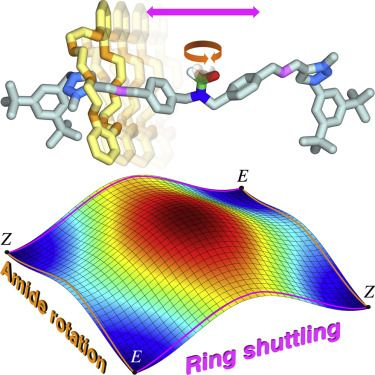 Gears and mechanical transmissions are at home in the Emilia-Romagna region, the Motor Valley of northern Italy. A team of researchers from the University of Bologna and the Institute for Organic Synthesis and Photoreactivity of the National Research Council (Cnr-Isof) in Bologna, led by Massimo Baroncini and Alberto Credi, has planned, constructed and operated NanoGear, a device consisting of interlocked molecular components and designed to function as a gear. Since molecules are nanometric objects (1 nanometer = 1 millionth of a millimiter), it is an exceedingly small device: certainly the tiniest gear ever produced in the Italian land of motors.

“The transmission and transformation of nanometric movements in biological molecules are the basis of the main functions of living organisms. Nevertheless, these phenomena are poorly understood in artificial molecules because they are extremely difficult to identify and observe. The construction of molecular devices such as NanoGear is a first step forward towards the development of ultra miniaturized mechanical devices based on molecular motors, with potential breakthrough applications in various fields of technology and medicine”, says Alberto Credi.

The NanoGear molecule belongs to the class of rotaxanes and consists of three components: a ring that can slide along an axle which bears a rotor installed in its center. “The ring is free to shuttle along the axle for its entire length, but it cannot escape because two bulky groups (stoppers) positioned at the ends of the axle prevent it from slipping off. The rotor is free to rotate around its own axis and has two different ‘blades’ to facilitate observation of the movement”, explains Massimo Baroncini. “The main design element of NanoGear lies in the fact that the rotor is directly linked to the axis with a regular chemical (covalent) bond, whereas the ring is mechanically locked around the axis by the presence of the stoppers. Both the translation of the ring and the rotation of the rotor are random oscillations determined by the thermal energy of the molecule; in other words, the gear is not coupled to any motor and functions ‘in neutral’. Sophisticated nuclear magnetic resonance techniques were used to observe the movements and measure their rates”.

At 65 °C, the ring shuttles from one end of the axle to the other about 7 times per minute, passing over the rotor; in the same amount of time the latter completes about 260 rotations. Therefore the two motions are not synchronized; however, they mutually influence each other, as demonstrated by experiments carried out on molecules similar to NanoGear but devoid of the rotor or the ring. Another significant and unexpected result is the effect of the medium in which the molecule is dispersed: by changing the solvent, one of the two movements is slowed down, while the other is accelerated. Such a ‘specific lubrication’ finds no correspondence in the macroscopic world, and constitutes one of the unconventional properties of nanodevices that could lead to radical technological innovations.

Artificial molecular machines, awarded with the Nobel Prize in Chemistry in 2016, convert energy from a source into controlled nanoscale movements and are one of the most striking results of nanotechnology. In order to exploit these movements, however, passive elements capable of processing them and transmitting them to other components, as it happens in macroscopic devices, are necessary. In this research, chemists operate in the same way as engineers and architects, but manipulating objects a billion times smaller, since their building blocks are atoms and molecules.

NanoGear is the result of a project born about five years ago and is part of a research activity in which the Center for Light Activated Nanostructures (Clan), a joint laboratory of the University of Bologna and the National Research Council, is an international reference point. NanoGear was created with the support of an Advanced Grant from the European Research Council (Erc), the most prestigious and competitive grant for scientific research in Europe. In the past, the same laboratory had already attracted public attention by developing molecular-based pumps (Nature Nanotechnology, 2015) and sponges (Nature Chemistry, 2015) powered by light. The central role of the research performed in Bologna on the subject of molecular machines was recognized during the “MolecularMachinesDays” event, held in Bologna in November 2018 with the participation of the three 2016 Nobel laureates in Chemistry.

The realization of artificial devices consisting of molecules is of great interest for the development of nanotechnology. “As shown by the results obtained in recent years in laboratories worldwide, nanotechnology can provide us with lighter and stronger materials, smaller and more powerful computers and robots, better systems for transforming and storing energy, new methods for medical diagnostics and therapies” Alberto Credi concludes. “NanoGear is a small but significant step in this direction. While it is currently difficult to identify a specific use of NanoGear, the basic research that led to its development has a revolutionary potential for science and technology that goes far beyond short-term practical applications”.