Do you know about oil wresting tournaments? In Turkey yağlı güreş is a national sport. 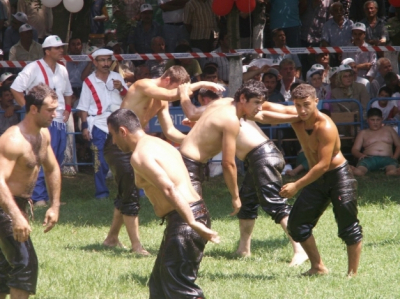 Do you remember how ancient wrestlers used to douse themselves with oil? In Turkey, oil wrestling or yağlı güreş is a national sport. The wrestlers, known as pehlivan, pour olive oil over their entire body to then face each other wearing only a type of lederhosen called a kispet, which is traditionally made of buffalo hide or calfskin. Oil wrestling matches may be won by achieving an effective hold of the kispet.

The most famous oil wrestling tournament in the world is held in Edirne, Turkey. Edirne, formerly Adrianople, served in the past as the capital city of the Ottoman Empire, and to celebrate its conquest, in June 1346 Murad I decided to organize a yağlı güreş tournament.

This event, called Kirkpinar, still takes place, and every year draws huge crowds. In Turkish, Kirkpinar means “forty springs”, and there is a reason for this name. According to the legend, in 1346 forty soldiers belonging to Suleyman Pasha’s troupes wrestled against each other, and at the end of the tournament, two finalists were left: Ali and Selim. They wrestled all night as neither was able to defeat the other, and were found dead the next morning. They were buried underneath a fig tree by their comrades, and when they returned after conquering Edirne, they found it surrounded by forty springs.

Unesco acknowledges the importance of this tournament, and has declared it an intangible world heritage event. Is there anything nowadays that isn’t included in the Unesco world heritage list?

The oil that the wrestlers douse themselves with is olive oil, made only from Turkish olives. There is indeed a strong link with the past, when the athletes of ancient Greece used to oil their skin before wrestling.