In every corner of Italy there are towns and villages whose names evoke olive trees and oil. Then again in a country where, from North to South, olive oil has played a leading role in our history for over two millenniums, it couldn’t be otherwise. A small Venice island also pays tribute to this plant. 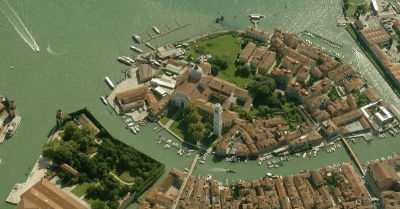 There are many place names in Italy inspired by olive trees and their oil. It could not be otherwise. I would like to signal one in particular: Olivolo. This name was found in an old Italian dictionary, namely the Dizionario corografico dell’Italia published by Vallardi in 1878.

According to Professor Amato Amati, author of the book, Olivolo is the ancient name of one of the small island on which the city of Venice was founded. It now corresponds to the part of the town known as Castello. The name Olivolo is thought to derive from Castrum Olivoli, i.e. the olive oil fort, and most likely refers to a stronghold erected on the island, overlooking the nearby Port of San Nicolò, and an olive tree that used to grow there, in the patriarchal square of St. Peter. Other researchers however believe that the term Olivoli derived from its oval shape.

The celebrated Treccani dictionary adds that in the Middle Ages, Olivolo was an independent military centre. It was also the residence of the episcopate and remained so until the Eleventh century, when it became part of Venice.