The mill and the sea

Many may find the mill/sea association unusual and probably a bit pushed too. Yet, it has wellestablished sense and history in southern Italy. Many of those who made a living fishing in hot months of the year had to find different jobs in autumn and winter 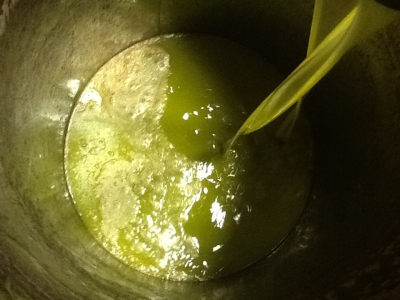 In areas where olive trees were grown abundantly, the mill was the workplace most people chose, as it employed them for five or six months uninterruptedly. Consequently, it is not a coincidence that the indelible mark of such an experience has remained in the lexicon used daily.

The head of millers was indeed called nachiro, from the Salento area dialect, a word stemming from nocchiero, indicating the chief of a boat, that is the person in charge of managing the boat and on-board services.

Other workers employed in the mill, at least until three decades ago, were universally considered as the ciurma, that is the boat crew.

The same applies to vegetable water, that is the liquid part different from oil, obtained in the mill at the end of olive crushing and pressing. Such water was usually defined sentina, exactly like drainage water and all other liquids depositing on the bottom of the boat.

Several other homonyms link boats and mills, which proves that these two universes shared many elements. For example, millers call quay the wooden cupboard olive paste was put on after being crushed, before filling fiscoli, rimmed pressing bags made of fibres, assembled and woven diaphragms containing olive paste to be pressed to obtain oil. Well, the word quay also exists in maritime lexicon, as everybody knows, where it designates the dock where boats land. The mill and the sea, two largely coinciding and parallel universes, continue to tell the story of many generations at the service of the greater good: on the one hand olive oil, on the other fish, two basic elements of healthy eating.