It is not a museum like most others. In Tuscany, Italy, a new, futuristic concept of a museum has seen the light. A plant sinks its roots into an ancient cistern, taking up the nutrients in an unusual manner. The signals of its “nervous” activity are constantly monitored and recorded. The visitor can even perceive the plant's most intimate emotions. 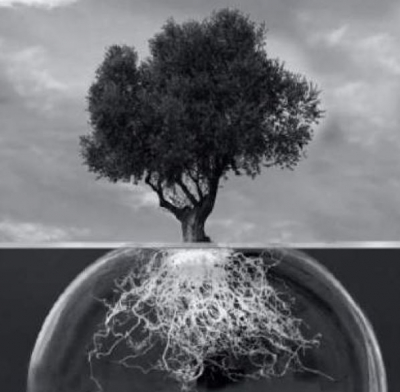 The uniqueness of the Museo dell’Olivastra e della Terra (the Museum of Olivastra and Soil) in Seggiano is that it gives the visitors the opportunity to observe the olive tree from a new point of view, discovering unknown and unexpected aspects, such as the plant’s emotional reactions and even the “intelligence” it displays in response to certain, specific stimuli.

As we all know, plants have a sleep-wake cycle like us humans. They are also capable of communicating with each other in a very complex and evolved manner, by releasing a variety of molecules, approximately 3,500.

Olive trees, like all other plants, have evolved a series of attack and defence strategies against other members of the plant kingdom and/or insects, and recent investigations have revealed that they also display nursing and parental care.

The plant’s “nervous” activity is signalled by electric impulses that are intercepted, converted and translated into a form that can be easily understood by the public, i.e. sounds. This is the core concept and key feature of the museum.

The visitor is welcomed into a large cistern, a symbolical access door leading into the chamber that is the real heart of the museum. The cistern is a large brick cylinder that was unearthed south-east of the historical centre of Seggiano, a town in the environs of Grosseto, near its ancient city walls. Its exact date of construction is unknown.

Coming through the roof of the cistern are the roots of Olivastra seggianese, an ancient olive variety native of this part of Tuscany. The tree takes up the nutrients it needs from the steam rising from a circular tank placed on the floor of the room. There are sensors recording the electric signals, monitoring the roots when the plant interacts with the surrounding environment, or responds to changes in temperature, wind, and other external stimuli.

The signals are monitored and artistically translated into a form of writing, which is then interpreted as a musical score. Everything is based on sounds. After this first underground experience, the visitors can exit the chamber up stairs that lead outdoors, into a square, where they will have the opportunity to observe the trunk and canopy of the olive tree at close range, and admire the rapturous beauty of the olive groves in the environs.