More olive trees, so as to protect our identity

As a boy, I was very struck by a brief yet extremely powerful and effective essay by a great Italian writer, Giovanni Arpino – whose work, as often happens when we shuffle off this mortal coil, has gradually fallen into oblivion, without this in any way undermining the great literary value of his writings.

In the preface to a rare and precious volume entitled L'olivo, written by Napo Mastrangelo, Arpino focussed on olive trees “that remind Man of his movements, his stature, his gestures”, pointing out that the olive tree has “the same face as Man, with its long deep scars”.

At first, I have to confess that it seemed rather an overstatement to associate the olive tree with Man. I used to think of it as a sort of poetic licence, a pure exercise in style, but then, as over the years I went on to read many similar tomes on the olive tree, it occurred to me – a conviction that has grown stronger over time – that, in point of fact, there is no other tree, in nature, anywhere in the world that is as close to the human species as the olive. Man and the olive tree seem to be at one, the expression of a single identity. Proof of this lies in the fact that this tree, so special and so unique, which played a central role in the legend of Athena, marks the birth of the polis, of one of history’s greatest and longest-lived cities, the hub of civic and political life, as well as a vibrant cultural stronghold.

In reinforcing this concept, I was also helped by a brilliant essay by Ildebrando Imberciadori, contained in the volume Storia dell'agricoltura europea[A History of European Agriculture], published by Etas Libri in 1980, in which he quoted Professor Mario Marinucci, of the University of Perugia, who told his students without hesitation that “the olive is the most human of trees because its nature, just like that of man, overflows with contrasts”. In his highly poetic Italian, from the 1950s, he spoke of the tip of an olive tree which “stands in all its splendour, and yet its trunk is gnarled, its branches twisted; its leaf is delicate yet sharp; its appearance is docile yet it contains the strength borne out of a life lived for centuries; its fruit is tender with a very hard pit, its liquid essence produces a flame that both nourishes and destroys, while life and death cross paths, consecrated by it, the joy of the offering intertwining with the extreme rite of sacrifice. The most sublime spirituality and the most earthly aspects thus merge in the olive tree: that is why it is known as the tree of Man”.

It might seem like a story from another era, told in an archaic style, but there is no getting away from the heart of the matter – the olive tree is the most human plant imaginable. And of course it goes without saying that if it hadn’t been for Man, all there would be is the oleaster, the wild olive tree that, as was effectively evoked in Homer's Odyssey, represents the loss of self, the condition of beastliness and the uncontrollable might of Mother Nature.

The olive tree marks Man’s entrance onto the stage of history. That is exactly why we should not be frightened by the idea of the olive tree today taking on other forms and features, becoming something different from what it was in the past.

Plants change, and new cultivars arrive on the scene. New cultivation criteria and templates are being adopted, as are new training systems. That means high density, genetic improvement. Today’s olive trees tend to be grown as a sort of community, as if coming together to form a crowd. At the time of Carthage, though, just before the birth of Christ, olive trees would be planted 13 metres apart, with 30 to 60 trees per hectare. Modern plantings, meanwhile, can have up to 400 olive trees per hectare. The gap between trees has fallen to as low as 5 metres; but with a super-intensive system, there can be two thousand or more trees per hectare. Just like Man the city-dweller, stuffed into buildings holding hundreds or even thousands of people. Over time, all things evolve; and both traditional and modern olive-growing techniques can coexist, as required, in different places, to suit different climates, slopes and exposures. Man and the olive tree share a common destiny. The more olive trees that are planted and cultivated, the more our identity can hold firm and continue on its long journey. Then it will all come to an end, on an unspecified day, as always, but we cannot possibly know how, when and why.

[The volume L’olivo / The olive, by Napo Mastrangelo, was published in 1982 in a bilingual Italian/English edition, not for sale, for Fertimont, a company in the Montedison Group.] 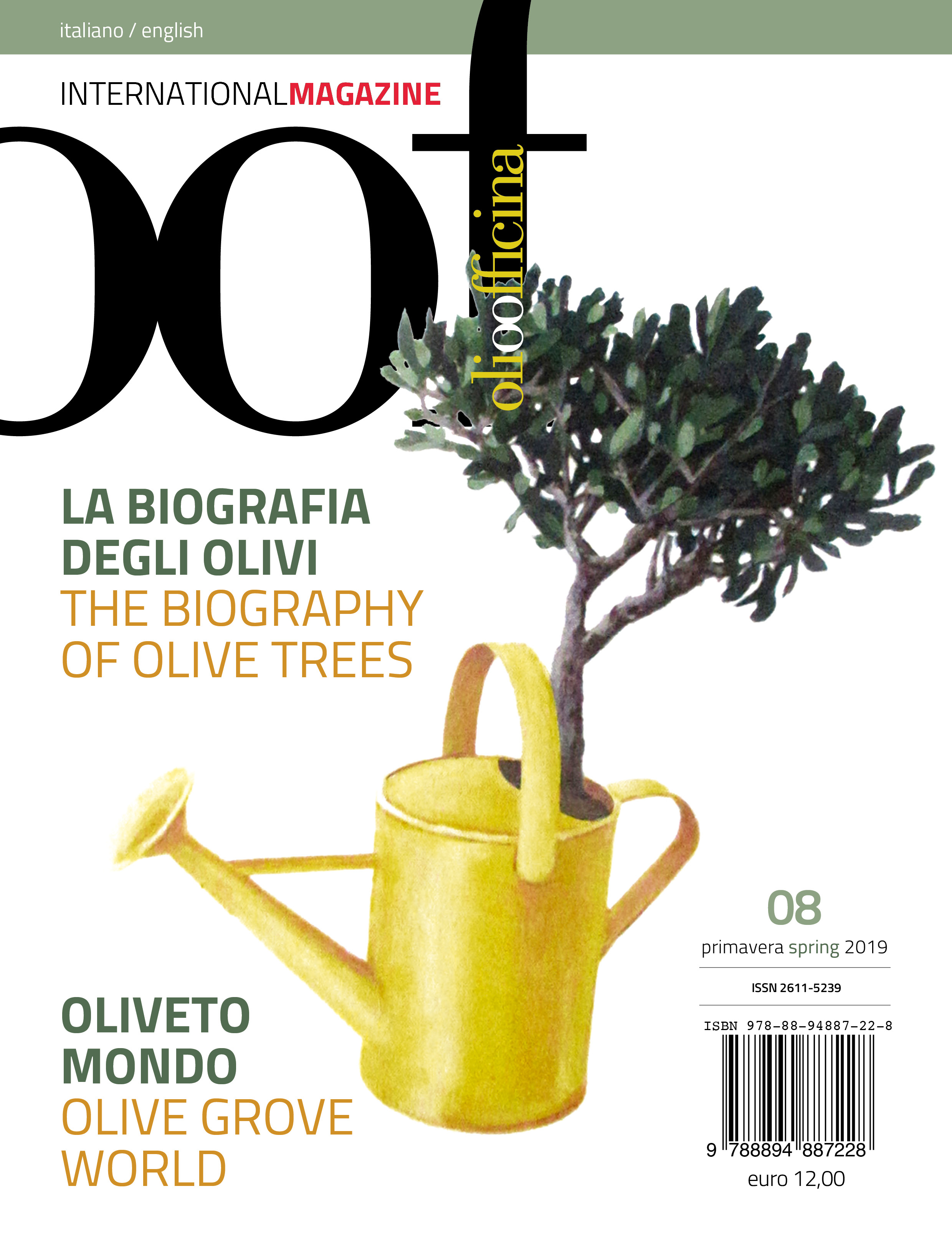 The editorial signed by Luigi Caricato is an excerpt from the eighth issue of the quarterly paper magazine OOF International Magazine. Buy the seventh issue of the magazine or subscribe HERE or HERE