The promise we make on the cover of issue 9 of OOF International Magazine – to provide a selection of recipes revolving around olive oil and vinegar – might sound overly optimistic. The challenge it expresses is however consistent with our vision: that of bringing seasonings and dressings to the fore, taking them to a higher level, of seeing them as ingredients in their own right: not in a supporting role but as a protagonist, whose function is nothing short of fundamental.

If we approach olive oil with an open mind and set aside our prejudices, we will realize that something we wrongly and for too long considered to be of marginal importance is in fact crucial.

Olive oils and vinegars, not to mention other ingredients/foods/condiments, are not at all marginal, despite being hastily dismissed as such.

Herein lies the sense of this challenge: to place olive oils and vinegars at the heart of a recipe, considering them “main ingredients” in every sense. We are clearly not talking in terms of the quantities to be used, because that would be impossible and senseless; the idea is to see them as the initial inspiration and raison d’être of a recipe.

What I suggest is turning this approach on its head. This means starting with an extra-virgin olive oil (but it could be any other vegetable oil, or animal fat) or a vinegar. In other words, we begin by choosing something that is generally considered marginal and secondary – the condiment – and then move backwards, adding the other ingredients as we go. Olive oil is analysed according to the rheological* and sensory characteristics that characterize and distinguish it. For example, let’s say we choose a medium-intensity olive oil offering fruity, herbaceous notes and a fresh, clean nose with aromas of artichoke and cardoon. This is followed by an attractively soft attack on the velvety, enveloping palate, where excellent fluidity perfectly offsets well-dosed bitter notes and progressive, persistent, yet well-balanced and harmonious peppery heat. The flavour profile combines vegetal notes of artichoke and green almond, and closes to an aftertaste of subtle green almond and a pinch of pepper.

So, once we have tasted the oil on its own, what next? What other foods can we associate with the olive oil we’ve just tasted? Gradually, we move back up the scale and select other raw materials that are ideally suited to the chosen olive oil, starting with the main ingredient, and then adding other ingredients from the list.

This is a strictly logical process in which each raw material must clearly relate to the others, and above all to the perceived sensory profile of the olive oil selected for the occasion.

This process, although per se simple and elementary, is crucial to the recipe’s success. This then, is what we mean by a recipe revolving around olive oil. In terms of quantity, the olive oil is not preponderant, since this would be impossible, but it is the starting point, since the aim is in fact to “construct” a recipe based on it. You could object that this is a mere exercise in style, and in a way you would be right. So does it really make sense to conceive a recipe revolving around olive oil or vinegar? On a practical level, perhaps not, but this is the point of my provocation and challenge: making the condiment the centre of attention, rather than assuming that any generic olive oil sold as such is the best solution for a given recipe. We should make an informed choice, the result of a serious reflection, otherwise we will continue to use olive oil as we always have, taking the first that comes to hand – usually a mediocre product purchased out of a misplaced sense of good value, but which may end up ruining the taste and balance of a dish. It’s as simple as that. My advice is to put condiments back at the heart of our recipes. They’re essential for the success of a dish, and should never be underestimated.

* A scientific branch of “rheology”, called “psychorheology", examines the perceived viscosity of an olive oil in order to respond to consumer preferences.

The editorial signed by Luigi Caricato is an excerpt from the 9th issue of the quarterly paper magazine OOF International Magazine. Buy the ninth issue of the magazine or subscribe HERE or HERE 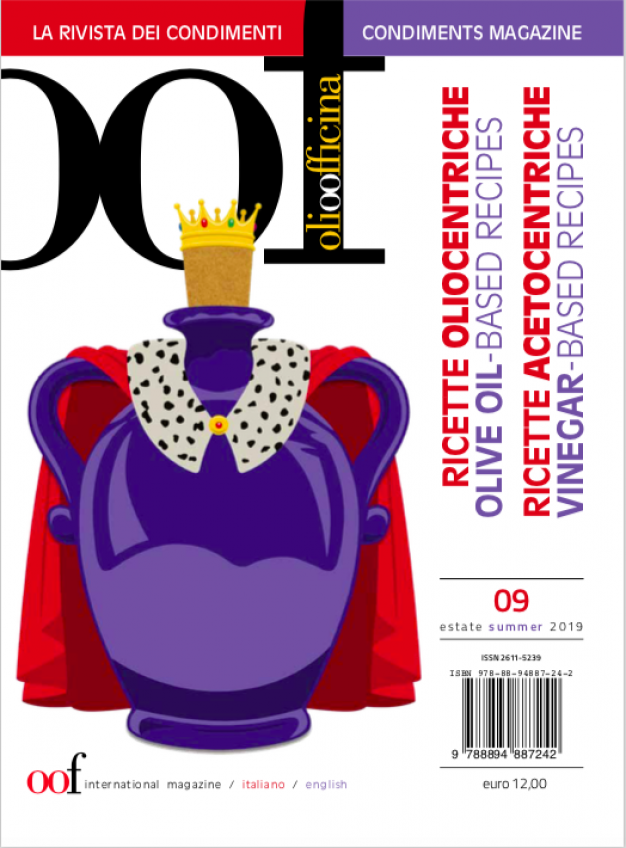