During the celebrations for the 60th anniversary of the IOC, the Georgian authorities raised the flag in front of the headquarters building and planted a young Georgian olive tree 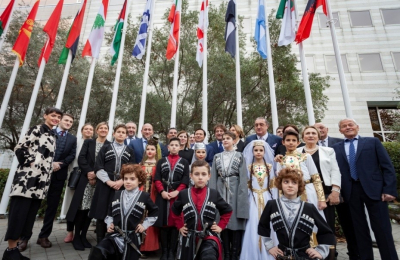 The ceremony was held in the presence of numerous authorities who also took part in the celebrations for World Olive Day, which was recently recognised by UNESCO at its 40 th General Conference.

The moment in which the tree was planted can be seen in the photo. Also pictured are the Executive Director of the IOC, Abdellatif Ghedira; the Deputy Minister of Agriculture and Environmental Protection Katia Tsilosani; the Ambassador of Georgia to Spain, Lila Giorgadze; and the owner of the largest Georgian olive oil company, George Svanideze.