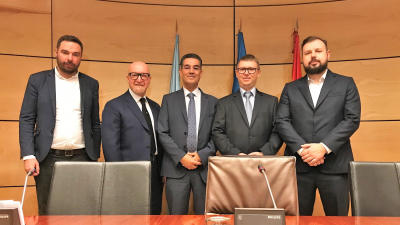 A growing number of observers are expressing interest in the IOC standard and calling upon their respective governments to join the International Olive Council. Among them is the delegation representing the Georgia Olive Growers Association who, under its chair, Ivan Bereza, attended World Olive Day celebrations on 22 November 2018 at IOC headquarters. Mr Bereza was accompanied by Jesús Vidarte Vargas, the head of representation in Europe, and Aleksandr Bondar, Aleksandr Savin and Igor Gladchenko, members of the “Agromine” association and creators of Biodeposit.

During a meeting held alongside World Olive Day 2018, Mr Bereza and other members of the delegation discussed possible joint activities with the Executive Director, Adbellatif Ghedira (pictured). Mr Ghedira urged Mr Bereza to encourage the government of Georgia to submit via diplomatic channels an official accession request to the IOC, a prerequisite for collaboration, and to send an official letter to the chair of the Advisory Committee so that it can attend committee meetings. According to the association, Biodeposit is an innovative project that focuses on developing olive-growing culture in Georgia.