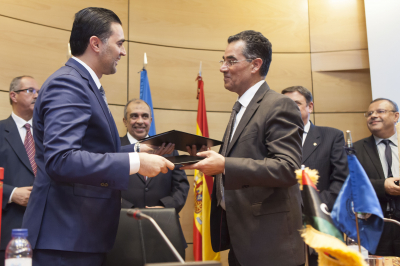 A collaboration agreement was signed between the International Olive Council and Libya during the World Olive Day celebrations at IOC headquarters on 22 November. The agreement was signed by the Executive Director, Abdellatif Ghedira, and by the chargé d’affaires of the Embassy of Libya in Madrid, Walid B. D. Abuabdalla.

The agreement, which was approved by IOC Member States, aims to develop and support the olive sector in Libya, in particular by creating two laboratories, one for the physico-chemical testing and another for the organoleptic assessment of virgin olive oils, and by keeping up with their activities.

The Executive Secretariat of the IOC will watch over the training programmes of qualified staff, through the Olive Growing, Olive Oil Technology and Environment Unit and its Technical Cooperation and Training Department. Regular meetings will be organised at IOC headquarters to monitor the activities carried out in Libya by the IOC.

The agreement was sealed with an official handshake between the two representatives (pictured) in the presence of authorities, the diplomatic corps, members and delegations of the IOC on World Olive Day, which was celebrated as part of the 108th session of the Council of Members.