Japan: a team works to facilitate adoption of the COI standard 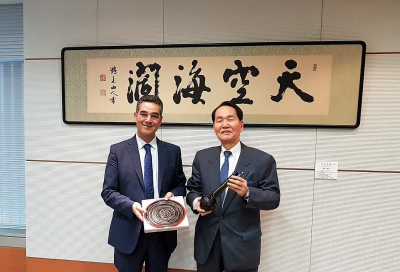 Abdellatif Ghedira, alongside head of the economy and promotion unit Ender Gunduz, took part in several meetings with Japanese olive-growing authorities and companies with the goal of Japan acceding to the IOC.

The representatives of the Executive Secretariat of the International Olive Oil Council first met the Japanese parliamentarians led by Mr Kawamura, who chairs a special study group on olive oil within the Parliament. They also met with the Japanese Minister of Agriculture, Forestry and Fisheries, Mr Takuya Hirai, who outlined how the government had attenuated the phenomenon of the growth of olive oil consumption in Japan for its positive health effects.

The minister also pointed out that the country has an interest in looking into harmonizing Japanese standards with those of the IOC and for this reason the Japanese Ministry of Agriculture, Forestry and Fisheries, the Olive Oil Study Group of the Parliament, the Association of Japanese Olive Oil Processors and the IOC should continue to work together to share the common interest in adopting the same standards for olive oil.

The major Japanese olive producers also gave their support for this project. After a meeting in Shodoshima, a statement was released encouraging the Japanese government to strengthen its ties with the IOC so that Japan can adopt the IOC’s standards.