Japan and the International Olive Council 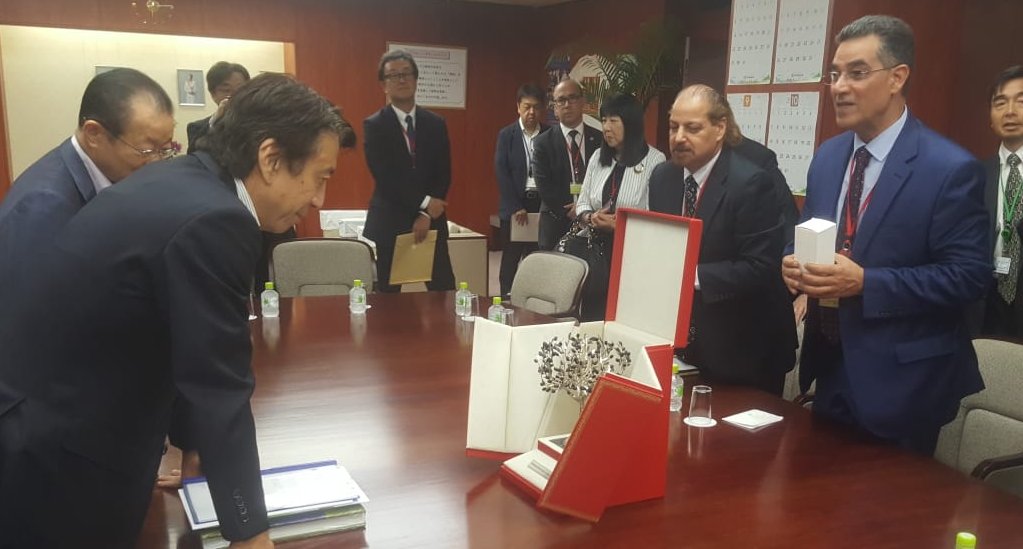 A Japanese task force made up of members of the Japanese Parliament and representatives of the Japan Oilseed Processors Association (JOPA), is working to support the Japanese Government, and in particular the Minister of Agriculture, Ken Saito (pictured receiving a gift from Mr Ghedira of a miniature silver olive tree and a bottle of one of the Mario Solinas Award-winning oils), to further Japan’s application to become a member of the International Olive Council (IOC).

This is the first concrete result of a mission carried out at the end of the IOC promotion campaign in Japan, by the Executive Director of the IOC, Abdellatif Ghedira, accompanied by the Head of the Economy and Promotion Unit, Ender Gündüz, and the Head of the External Relations Department, Mounir Fourati.

A number of meetings were held during this mission, first with the Ambassadors of Turkey and Tunisia and the Counsellor of the Trade and Economic Section of the Delegation of the European Union to Japan, Mervi Khalos, followed by meetings with the Chairperson of the Budget Committee of the Chamber of Representatives, Takeo Kawamura and with representatives of JOPA: president Fuminao Hachiuma and managing director Akira Saito. All these meetings were aimed at discussing Japan’s potential accession to the IOC.

Japan, which does produce extra virgin olive oil in its Kagawa region, can however not meet its internal demand. It imports approximately 60 000 tonnes of olive oil a year, mainly from Spain, Italy, Greece, Turkey and Tunisia. It is the third largest importer of olive oil, outside the members of the IOC, after the United States and Brazil. Its market is growing rapidly and an increasing number of consumers are turning to the properties offered by this product, adding it to their diets mainly for health reasons.

In this regard, the representatives of JOPA are intensifying their awareness raising activities with the Parliament and Government. In a statement, Mr Ghedira observed that, “the IOC is working on the application for recognition of two chemical analysis, two organoleptic training courses for tasting panels were organized with IOC support and  Shozu Olive Research Institute from Kagawa Region sent its application for recognition of tasting panel. The IOC is now preparing to examine Japan's request to organise a third course for tasting panels with experts of other nationalities”.

Minister Saito, who received the IOC delegation at the end of its mission, welcomed the Executive Secretariat’s work with Mr Kawamura towards Japan’s accession to the IOC.

Mr Ghedira hoped that Japan would begin its journey towards accession by first becoming an observer of the IOC. The objective in this was “to enable Japan to get to know the Council and to decide, on that basis, on any future request for accession”.

A good target would be 2020, the year in which Japan will host the Olympic Games. Japan’s accession to the IOC, and the application of its standards, would enable the country to welcome the large influx of foreign visitors while guaranteeing them, and national consumers, the standards of the IOC. These standards would increase the guarantee of the quality of the extra virgin olive oil offered to Japanese and international consumers in a global market, according to shared rules based on the quality standards of the IOC.