A ceremony was held to mark the occasion, and the Executive Secretariat invited a number of representatives from various governments, the diplomatic corps and delegations from Member States to headquarters in Madrid 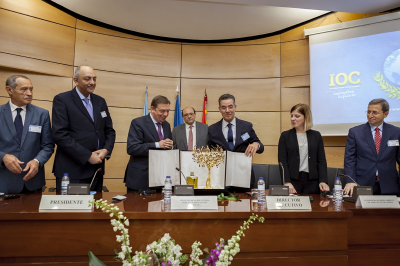 As part of the 110th session of the Council of Members, the International Olive Council also celebrated 60 years of the Organisation and Unesco’s official proclamation of 26 November as World Olive Day.

A ceremony was held to mark the occasion, and the Executive Secretariat invited a number of representatives from various governments, the diplomatic corps and delegations from Member States to headquarters in Madrid.

In his introductory speech, the Executive Director, Abdellatif Ghedira, praised the Executive Secretariat for its hard work in supporting the olive sector in all 17 countries that have so far acceded to the International Agreement on Olive Oil and Table Olives 2015.

He also presented an institutional film, the celebratory logo created for the occasion and the special, 60th anniversary issue of Olivæ, the IOC’s official journal. The Executive Director and the Spanish Minister of Agriculture, Fisheries and Food, Luis Planas, then signed the new Headquarters Agreement between the IOC and the Kingdom of Spain, which establishes the relationship between the two institutions.

The ceremony also saw the signing of an agreement between the Ioc and the Santander Foundation for sustainable collaboration and synergy in training, research, events and regional projects.

Before the session closed, the Executive Secretariat paid a tribute to several representatives of the international olive sector who have distinguished themselves for their work in promoting olive oil throughout the world. Tributes were paid to the following personalities:

– Ezeldine Abusteit: Former Minister of Agriculture and Land Reclamation of Egypt and current Chair of the IOC, Abusteit is an affable, modest, hardworking, attentive, open and passionate man (tribute written by the Ambassador of Egypt in Madrid, Omar Selim).

-Pierre Bonnet: a pioneer at the dawn of what was to become today’s international olive sector; Bonnet was appointed by the highest level of the UN to found the Organisation and be its first Executive Director.

-Luis Rallo: Professor Emeritus of the University of Cordoba, brilliant among the brilliant, Rallo needs no presentation. He has dedicated his life to research and development in the olive sector.

-Nehayah Shaher Mustafa Almuhisen: an agronomist who has devoted his career to the study of the olive tree and in particular to the development of the olive sector in his country, Jordan.

-Loriana Abruzzetti: Born in an oil mill, her career started well! Chair of Pandolea, an association of women in olive oil, she promotes the culture of women and extra virgin olive oil.

The event ended with a ceremony to raise the flag of Georgia, the 17th member of the Ioc. The Georgian authorities were accompanied by a group of young children wearing traditional Georgian clothing, who delighted guests as they commemorated 60 years of the Ioc and World Olive Day.