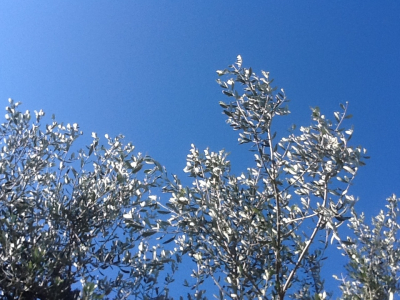 Heavy uncertainty hangs over the olive oil crop in Spain for 2015/16. Even so, it is expected to be more than 40 pc higher than in 2014/15. The past 12 months have seen complicated weather conditions and record temperatures during key phenological stages of the olive, says José María Penco, an agronomist with AEMO, the Spanish Association of Olive Municipalities. Coupled with a shortage of rainfall during the water year soon to end, these factors have generated uncertainty, particularly so in rainfed orchards, which initially looked poised to get off to a good start after the previous restful “off” year.

There are two approaches to predicting the next harvest, explains Penco. One is to conduct visual inspections and fruit counts on the ground in olive orchards. The other is to analyse the agro-climatic variables that affect fruit development from flowering until early September.

The AEMO expert confesses he has neither the means nor sufficient data for the field approach. For harvest predictions to be reliable, technical officers have to be strategically placed around the country and to apply a stringent measurement methodology. For the time being, he says, only the Regional Government of Andalusia has these means but it has not yet published any data.

In his opinion, all that can be said is that up to the end of July there was a huge difference between irrigated and rainfed olive orchards and large variations between areas, and even between farms, depending on how advanced flowering was when temperatures hit record levels in May. Going by the great heterogeneity among orchards on the ground, it can only be asserted that there will not be a bumper olive oil crop in 2015/16 although the harvest will be bigger than last season.

The second forecasting approach is very complex because numerous variables are involved and they are not uniform in all orchards. Even so, Penco outlines the most important milestones in the decisive phenological stages.

Starting conditions: Last season, Spain produced only 835 000 t of olive oil when its orchards have the potential to produce up to 1 800 000 t. This augurs well for the crop in 2015/16 because the olive’s alternate bearing pattern, particularly in rainfed orchards, means that an “off” year is followed by an “on” year with abundant flowering.

Precipitation: Mean precipitation in Spain’s olive growing areas is down by 30 pc, in other words the water year has been dry. Rainfall was low in the autumn-winter of 2014 and this year’s spring was quite dry too. As a result, soil moisture is low or even very low in some areas. All eyes will be trained on the rainfall in late summer and early autumn, which is vital for oil formation and the completion of fruit growth. 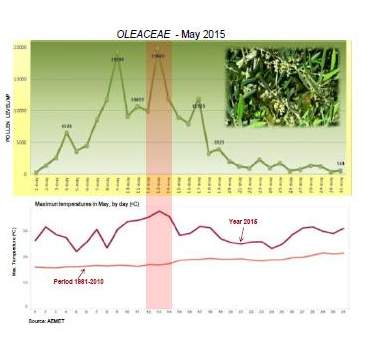 – Around 12 May, when the trees were flowering, temperatures rose to all-time highs in most of Andalusia’s olive orchards. The temperatures of close to 40º C impacted differently on districts, depending on whether or not the trees were in full bloom. Damage was on a smaller scale when the olive fruits had been set for at least 15 days. This was the case in areas such as Cadiz, Seville or southern Cordoba where this process takes place earlier. However, in Jaen, the hub of Andalusian olive cultivation, air pollen density coincided fully with a week of maximum temperatures (see chart on the right). So, temperature damage during flowering has been dissimilar, even inside the same province, depending on the phenological stage of the flowers/olive fruits.

– Weather was very harsh in areas of southern Spain in the month of July when temperatures of 40º C were recorded for more than 20 days, and longer in some cases. This was particularly harmful to the olives that had not yet completed the stone hardening stage and which withered before cell proliferation was over. Some of this fruit has fallen from the trees; the rest remains on the trees but has fewer oil-forming cells. Here again a distinction has to be made between rainfed and irrigated olive orchards and the phenological stage reached on each orchard at the beginning of July.

In short, concludes the AEMO technical officer, the forecasts for the next olive oil harvest are shrouded in uncertainty with many, complex variables in play. Some work in favour of the harvest but most –the weather variables – work against it. Depending on precipitation in the month of September, Penco reckons that olive oil production will reach 1 200 000 t at the most. It is also worth noting that the 2015/16 season will open with stocks at one of their lowest levels. Market concern is translating into high prices (see prices section).

This situation is aggravated by the weakness of the euro vis-à-vis the dollar. If it persists, it will lead to another year where world consumption goes down. This is not good news because winning back consumers always takes time whereas a bumper world crop can appear on the scene all of a sudden.