For the first time ever, the International Olive Council held the Mario Solinas Award Ceremony in Japan within the framework of its Believe in Olive Oil promotion campaign in this Asian country. 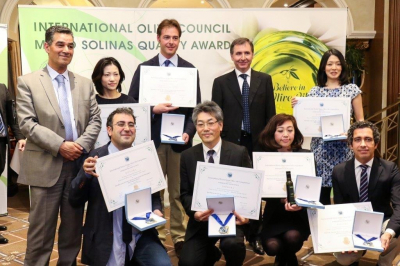 The ceremony took place on 13 April in Victor’s restaurant at the Westin Hotel Tokyo, coinciding with FABEX JAPAN 2016.

Since 2000, the international competition held for this Award seeks to choose the very best extra virgin olive oils the world has to offer. In the past, the Award ceremony usually took place in Spain but last year the United States hosted the event and this year Japan has been the venue.

The gold, silver and bronze medals in the four competition categories were presented by the IOC’s new Executive Director Abedllatif Ghedira who told the audience about the winning oils. This was the first official visit paid by the IOC chief to Japan.
Guests were able to savour Japanese dishes made with the olive oils and to enjoy an introduction to Japanese cooking with olive oil led by Master Chef Toshio Numajiri.

Speaking about this visit to Japan, Mr Ghedira said that it had made him realise just how much interest there was in olive oil in Japan. He firmly believed that promotion should create more awareness of the IOC trade standard to make sure that consumers are properly informed about olive oil products.

The event was attended by local media professionals and diplomats from the embassies of IOC member countries in Japan.

About the Believe in Olive Oil Campaign

Believe in Olive Oil is an awareness creation campaign being run by the IOC in Japan for approximately one and a half years from July 2015 to December 2016. Its core elements are to promote understanding of: 1) the health benefits of olive oil; 2) the use of olive oil in Japanese cuisine; and 3) international standards for olive oil. This slogan was chosen to encourage people to discover the properties of this fascinating product.