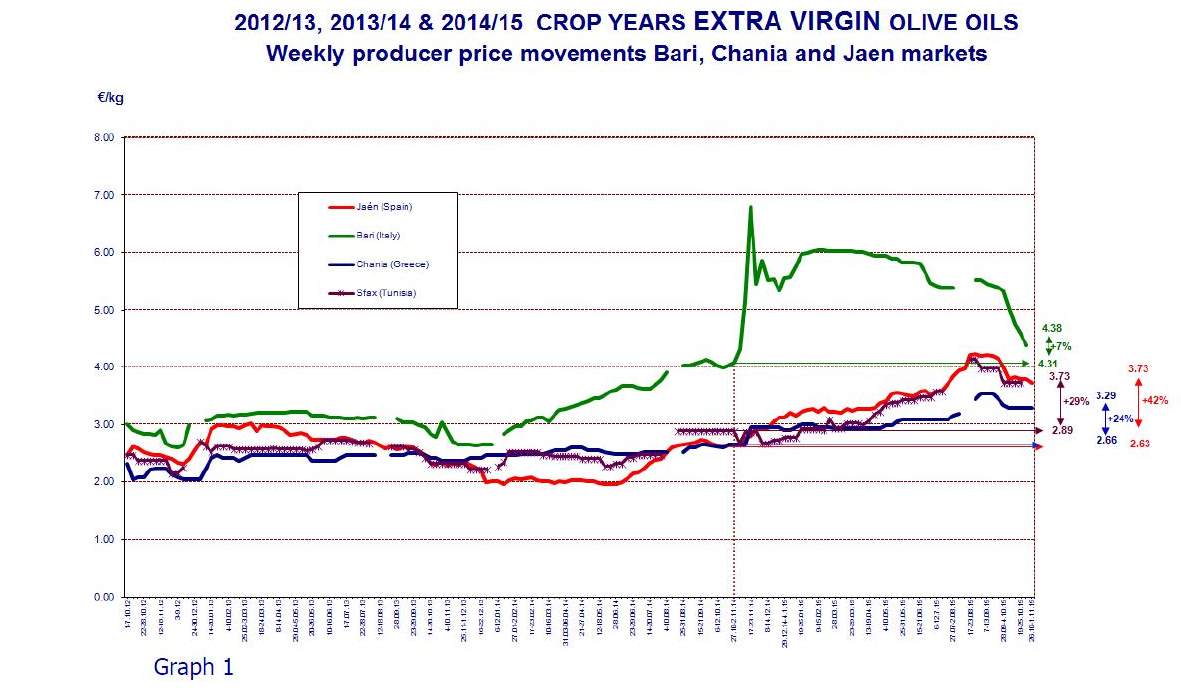 Graph 1 tracks the weekly movements in the prices paid to producers for extra virgin olive oil in the three top EU producing countries plus Tunisia while Graph 3 shows the weekly changes in the producer prices for refined olive oil in the three main EU producers. The monthly price movements for the same two grades of oil are tracked in Graphs 2 and 4.

It is not for the IOC to judge whether these price levels reflect an adequate balance between production costs along the supply chain and the prices that consumers are prepared to pay in their domestic currency to continue consuming olive oil. Nevertheless, this is a concern that all the players on the market will no doubt take into account with an eye to the long-term sustainable equilibrium and development of the sector.

Producer prices in Spain started to rise in November 2014. After topping €4/kg in the second week of August 2015, they continued upwards to reach a period high (€4.23/kg) in the third week of August, at which point they switched direction, falling to €3.73/kg by the last week of October 2015. This latest price level is still 42 pc higher than a year earlier and 90 pc above the low recorded in the third week of May 2014 (€1.96/kg).

Italy: In the week from 10 to 16 November 2014, producer prices in Italy hit the highest level of both the period under review and the last decade, reaching €6.79/kg. After decreasing slightly in the second last week of December 2014 prices turned back upwards, only to fluctuate again and then drop sharply, reaching €4.38/kg by the end of October 2015, i.e. still 7 pc higher than a year earlier and 66 pc more than the low recorded in the second week of December 2013 (€2.64/kg). Graph 2 shows how the monthly prices of extra virgin olive oil have behaved in recent crop years.

Greece: In the third week of January 2015, prices in Greece crossed the three-euro/kg line. After small fluctuations, they rose to period highs (€3.54/kg) in the last weeks of August and first week of September 2015. In recent weeks they have been holding steady and were lying at €3.29/kg at the end of October 2015, +24 pc higher than the same period a season earlier.

Tunisia: After starting to move upwards in the first week of January 2015, producer prices recorded some small fluctuations, then climbing to period highs in the last weeks of August. Then, like elsewhere, they started to drop, reaching €3.73/kg by the end of October 2015, equating with period-on-period growth of +29 pc. 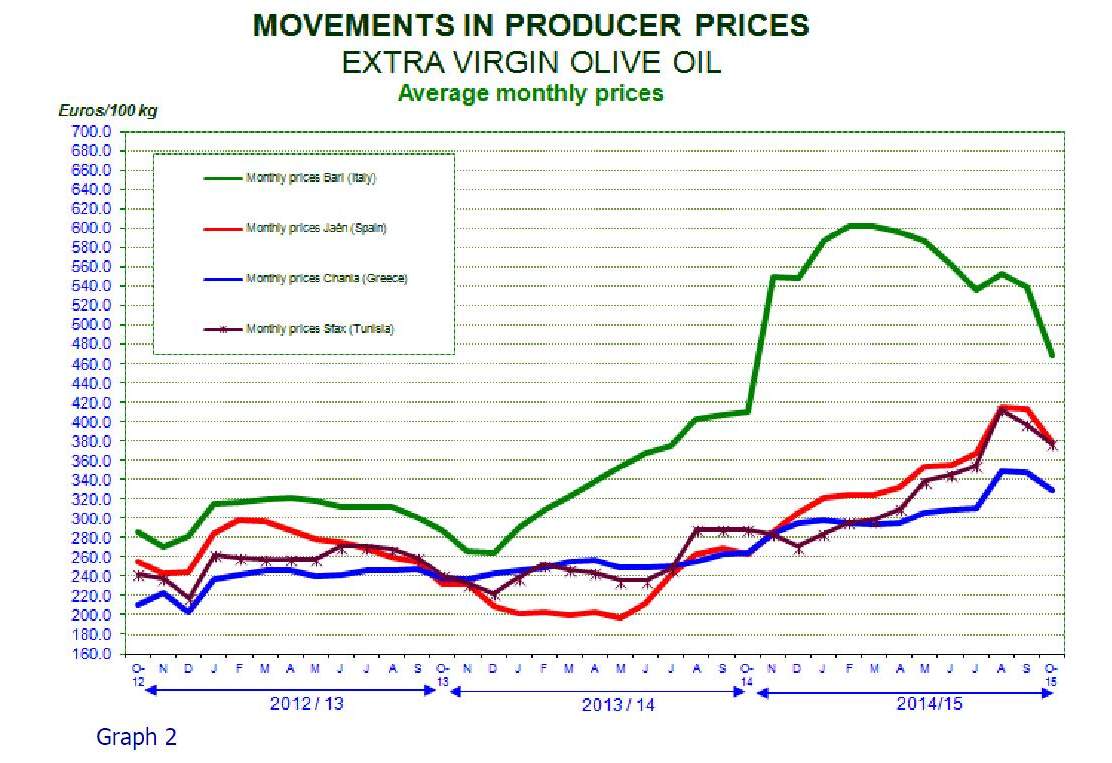 In August 2015 producer prices for refined olive oil hit their highest levels for the period under review. In Spain they then started to drop, reaching €3.34/kg by the end of October 2015, although this level was still 31 pc higher than in the same period of the preceding crop year. The trend in Italy has been similar in that prices had dropped to €3.35/kg by the end of October 2015, although again this was still higher (+32 pc) than the same period the season before. No price data are available for this product category in Greece.
At the end of October 2015, the price of refined olive oil (€3.34/kg) and extra virgin olive oil (€3.73/kg ) differed by €0.39/kg in Spain whereas in Italy the difference between the two categories was considerably wider (€1.03/kg – Graph 3). 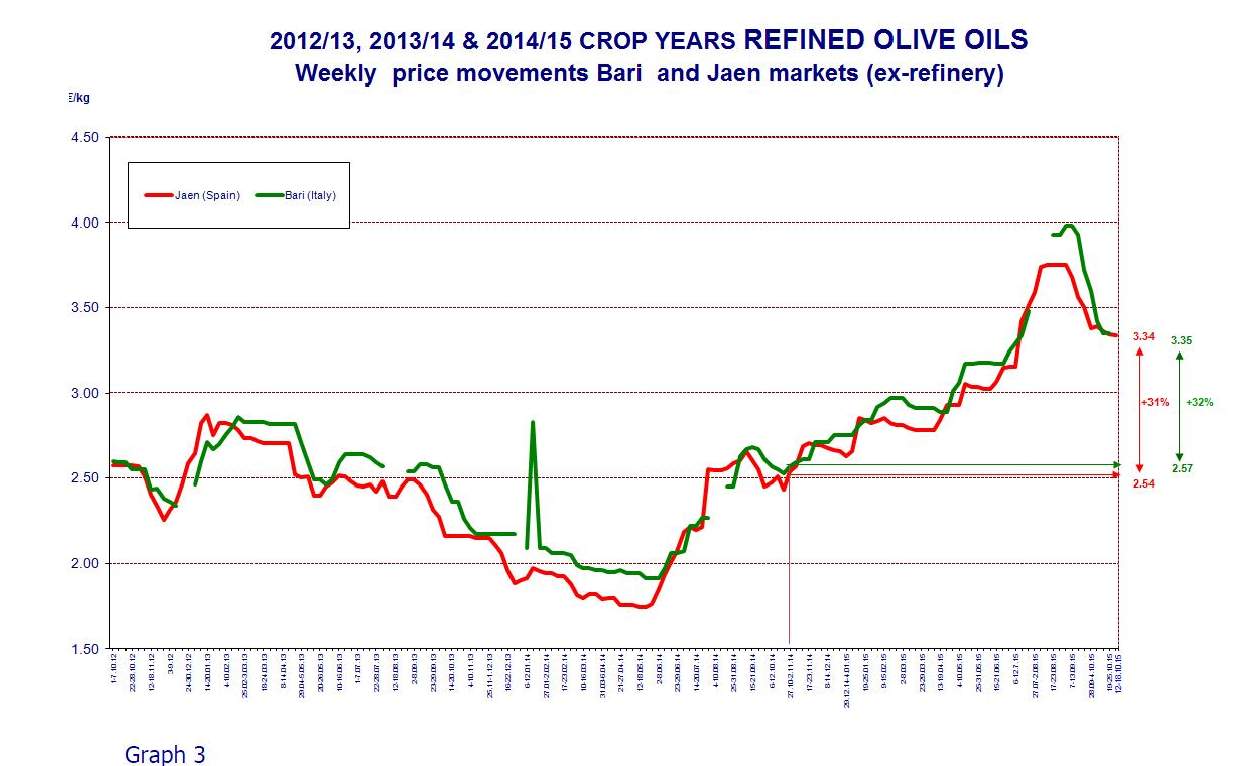 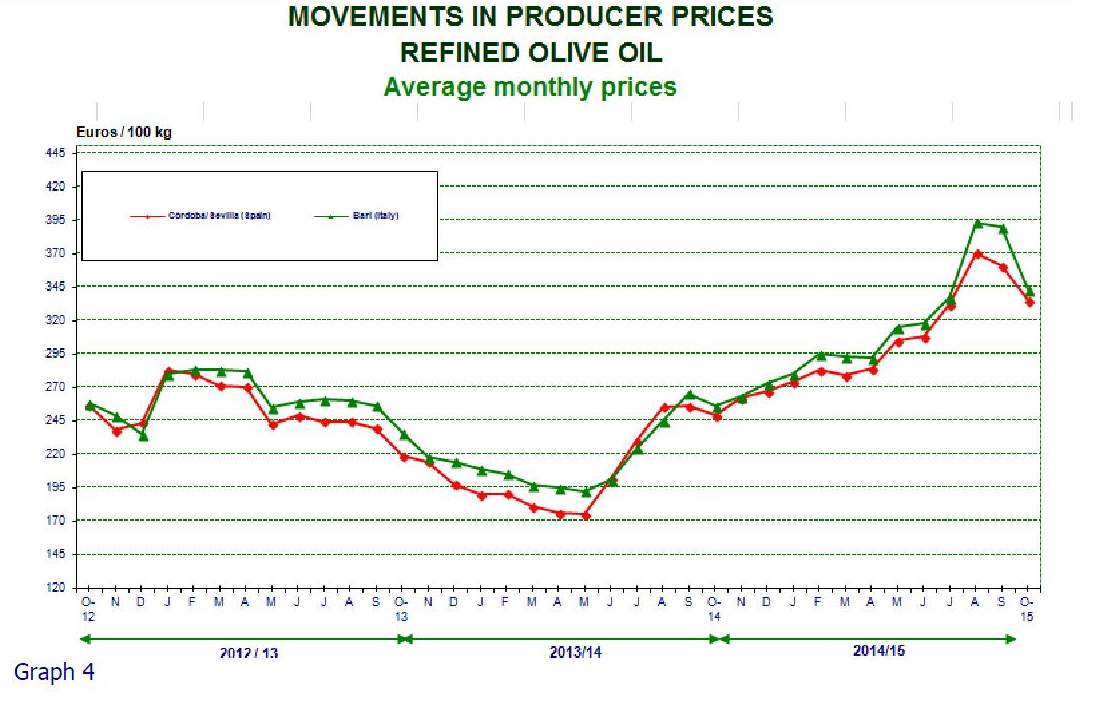