The 2015 edition of Simei, the leading international trade fair for wine technology, ended last Friday in a climate of general enthusiasm. The keys to the success of the event include the high quality of the innovative technological solutions, the discussion among the world's most important stakeholders on crucial issues such as sustainability and sensory analysis and the revolution of the layout and the side events organised by the Unione Italiana Vini (the organiser of Simei since the first 1963 edition) to foster constant opportunities for contacts and relations. 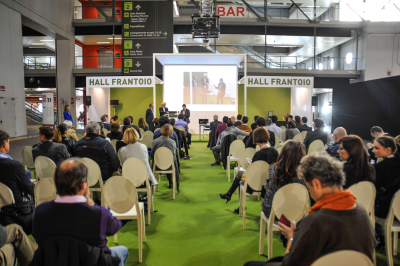 This 26th edition of SIMEI, the biennial event dedicated to machinery for Winemaking and Bottling held at the Fiera Milano Rho, was the reference point over four days for operators and companies in the wine industry. 31,000 professional operators attended the event from 90 countries interacting with over 600 high profile exhibitors, whose international record is the made in Italy brand (over 70% of the wine-making technologies in the wineries around the world are Italian).

“SIMEI does not stand out only for its exhibition content that is unique in the world” – said Francesco Pavanello, General Director of the UIV – “since the industry recognises it as the main platform for the promotion of technology, but above all it has become a must for professional development and international relations. The UIV’s aim has been to enrich the exhibition with an organised and coordinated broadening of relations that we have named WINEPRO: a revolution both in the layout of the trade fair and the side events that has brought together visitors, exhibitors, over 150 speakers and 250 journalists from national and international industry papers. Today, SIMEI is a cross-media fair that uses the latest technology to enhance the dissemination of the content provided by the exhibitors and the 2 international conferences and the over 50 events: from the circulation in streaming of conferences to the innovative digitization of the fair with the downloading of more than 450,000 media contents during the event.”

“I should like to emphasise that the government considers the exhibition industry as crucial”- the Deputy Minister of Economic Development, Carlo Calenda, wrote in his speech that was read during the SIMEI Networking Event -” Hence the support we have guaranteed Simei, an event that represents and interprets the world record held by the Italian industry and technology for winemaking and bottling. The success of this event has accompanied the growth and success of an industry that is both a value in itself, in terms of economy and production, and a strategic asset for the development of our wine growing internationally.”

After this year, SIMEI will debut in Munich for the next drinktec (11-15 September 2017), the World’s Leading Trade Fair for the Beverage and Liquid Food Industry, where it will be present as the WINE FOCUS, covering an area of about 20,000 square metres dedicated exclusively to the wine industry. This follows an agreement reached with Messe München, the first of this magnitude in the international trade fair scene.

The 2019 edition of SIMEI will take place in Italy and will return to Munich in 2021.