Spain gives its full support to the International Olive Council 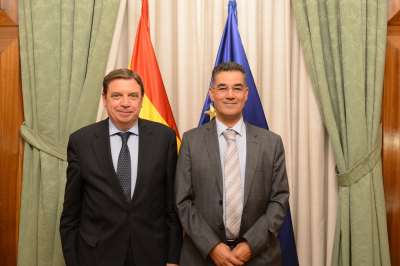 The Spanish government conveyed its full support for the IOC during a meeting between the Minister of Agriculture, Fisheries and Food, Luis Planas, and the Executive Director of the IOC, Abdellatif Ghedira (pictured).

Over the course of the meeting, which was held at the offices of the Ministry, the Minister was informed of the Executive Secretariat’s work on olive oil chemistry and standardisation, technology, the environment, training, economics, statistics and promotion. He learned about the new world olive oil observatory.

Ghedira was accompanied by Deputy Executive Director Jaime Lillo, while the Minister was accompanied by his chief of staff Juan Prieto Gómez. Together, they spoke about the strong relationship between the Kingdom of Spain and the IOC and reiterated their intention to continue promoting institutional collaboration.