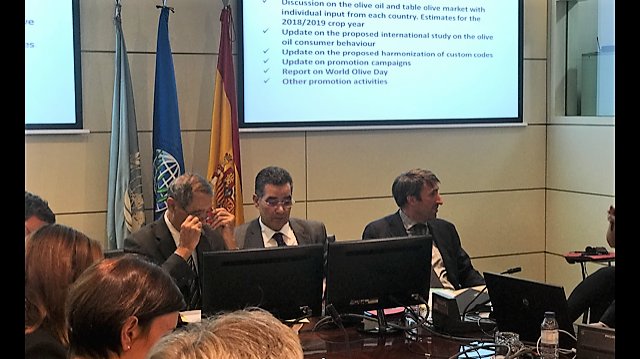 The Executive Director, Adbellatif Ghedira, opened the 52nd meeting of the Advisory Committee on olive oil and table olives. He was accompanied by Jaime Lillo and Mustafa Sepetçi, the two Deputy Executive Directors. Representatives from the olive sector around the world came to IOC headquarters in Madrid to attend the meeting. Ali Ben Hadj M’Barek held the chair; he focused on the ratification of the 2015 International Agreement on Olive Oil and Table Olives, taking note of the conclusions of the 107th session held in Buenos Aires, Argentina in June 2018, and of the proposals to be presented at the session in November, and analysing the draft document on the application of the organoleptic assessment method to be submitted to the Council of Members.

The Advisory Committee was informed of the Executive Secretariat’s activities in economics and promotion; chemistry and standardisation; olive growing, olive oil technology and the environment; and the progress of the new global centre of documentation on olive growing (the Observatory).

On this occasion, the vice-president of the Egyptian Olive Council, Mostafa Hashem, announced that his country was a candidate for the 53rd meeting of the Advisory Committee, which could be held in Cairo in April 2019.

At the end of the meeting, M’Barek thanked María Isabel Gómez, the head of the Economy Department, on behalf of the Advisory Committee, the Executive Director, and the Executive Secretariat. She will retire at the end of 2018, and so the chair thanked her for her tireless work over the years in supporting the olive sector the world over.