Tunisia and the International Olive Council intensify their collaboration 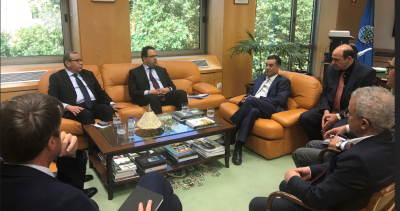 After the exchange of the customary institutional greetings, the meeting was inaugurated by the Head of the IOC’s External Relations Department, Mounir Fourati. Next, the meeting continued with the presentation by Executive Director Abdellatif Ghedira on the situation of the application of the new International Agreement on Olive Oil and Table Olives. The IOC Deputy Executive Directors then took the floor, first Jaime Lillo spoke about the activities carried out by Executive Secretariat, then Mustafa Sepetçi on the Observatory. This was followed by Heads of Units Ender Gunduz – who spoke about promotional activities and grants for World Olive Day – and Abdelkrim Adi – who spoke about training, environment and international cooperation in general. María Isabel Gomez, Head of the Department of Statistics and Economics, presented the overall situation of the world olive oil market and updated data from the crop year.

Minister of Development, Investment and International Cooperation Zied Ladhari congratulated the IOC for the work done and, along with Ambassador Wacef Chica, thanked the Executive Director for his hospitality and efforts to strengthen cooperation at an international level. Minister Ladhari recalled that Tunisia is one of the world’s leading players in the olive oil sector and that the country has always been, and will continue to be, a strong advocate for the activities implemented by the IOC. “Our conviction is even stronger today, after seeing the work of the IOC” said Ladhari. “Its activities coincide with the policy of environmental protection, research and development of the sector and training adopted by the Tunisian government. The initiative of the Observatory is beautiful and interesting. We wanted it and we will support it.”

“The IOC is a generator of positivity in the Mediterranean and around the world,” said Said Samir Majoul, president of the Tunisian Union of Industry and Trade (UTICA). “The olive tree is the tree of the future. It should be planted wherever it can be planted. It improves the environment, its product is an elixir of life, it is a tree that gives back to the earth what it takes from the earth and above all, it is an irreplaceable source of income for millions of families across the world. It is a plant that we must all support, also phytosanitary, seeking to stem the negative phenomena that affect it, such as Xylella fastidiosa, by adopting varieties resistant to this formidable bacterium. In this sense, an institution like the IOC is fundamental because it represents a certain point of synthesis that the business system in general cannot do without.”