Tunisian Minister of Tourism and Handicrafts pays courtesy visit to Ioc headquarters. The interview focused on the different activities implemented by the Ioc, as well as on the concept of the Olive Route 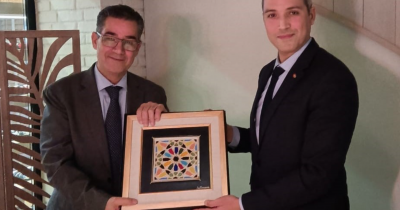 Mr Mohamed Moez Belhassine, Minister of Tourism and Handicrafts of Tunisia, paid a courtesy visit to the Executive Director, Abdellatif Ghedira, on 18 January 2021.

The Tunisian Minister was accompanied by Ms Fatma Omrani Chargui, Tunisian Ambassador to Spain, and her staff, as well as by a delegation of senior officials from the Tunisian Ministry of Tourism and Handicrafts and the National Tourist Office of Tunisia.

The delegation was welcomed by the Executive Director and the Tunisian officials of the Organisation.

The interview focused on the different activities implemented by the Ioc, as well as on the concept of the Olive Route, which is of interest to several Ioc member countries and which integrates tourism into the olive growing world.

At the end of the meeting, souvenir photos were taken and gifts were exchanged.

The Minister then wrote a few words in the Ioc guestbook to make the visit permanent. Both delegations left the Ioc headquarters to visit the Fundación Santander and admire its orchard of thousand-year-old olive trees.