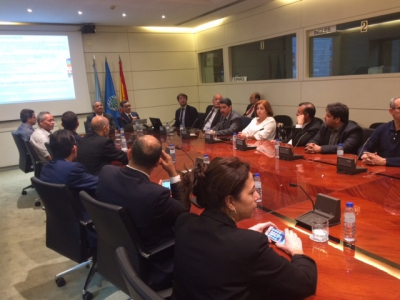 A delegation of Tunisian members of parliament visited the headquarters of the International Olive Council on Monday, 16 October, during a work assignment to Spain. They were received by the Executive Director, Abdellatif Ghedira, the two Deputy Executive Directors and the officers in charge of communications and legal affairs.

The Tunisian MPs indicated their strong interest in the activities of the IOC given the symbolic, religious and economic importance of the olive tree in Tunisia. They also discussed the health benefits and the culinary versatility of olive products. Further to being an element of cultural and national identity, they explained that the olive tree can provide security and stability in many regions, particular in low-population density areas, where the development of the olive sector could curb the rural exodus phenomenon.

The Executive Director provided an overview of the objectives of the International Olive Council and presented statistics on the world olive sector and the Tunisian sector in particular. He indicated that the IOC was at the disposal of its member countries, to provide them with all the available means of developing the sector, namely through its research and development and training activities.