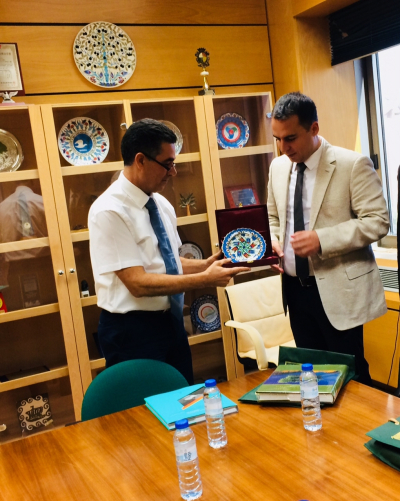 A delegation of experts from the Turkish Ministry of Culture and Tourism visited the headquarters of the IOC on 10 October during a mission to Spain. This took place prior to their meeting with representatives of the Directorate General for the Protection of Intangible Heritage of the Spanish Ministry of Culture and Education, and with officials of the World Tourism Organisation – also headquartered in Madrid – in charge of studies on UNESCO intangible cultural heritage. At that meeting they planned to discuss the relationship between olive oil and table olive culture and sustainable tourism, and to explore possibilities for collaboration.

Their mission was part of work carried out to prepare for an application by Turkey, in collaboration with Spain and Italy, for the inscription of olive oil and table olive culture on the UNESCO Representative List of the Intangible Cultural Heritage of Humanity.

While in Madrid, therefore, the Turkish delegation took the opportunity to visit the headquarters of the International Olive Council, as the reference body on matters relating to olive oil and table olives and bringing together producer countries accounting for up to 94% of global olive production. The members of the delegation were Okan İbiş (Director General), Nevzat Vural (Deputy Director); Kerem Dursun Tezcan (Head of Department) and culture and tourism experts Umut Aksungur, Serkan Emir Erkmen, İsa Satar and Mert Kabasakal. The delegation was received by the IOC Deputy Executive Director, Mustapha Sepetçi, and the officers in charge of the IOC Executive Secretariat Departments for Olive Growing and Olive Oil Technology and Communications. At the end of their visit, they presented the Executive Director of the Organisation with a gift.