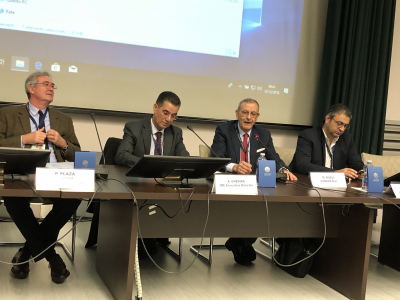 The IOC has opened, together with the CIHEAM, the international meeting on “Integrated actions against Xylella fastidiosa to protect olive trees and international trade” with the participation of nearly 100 persons. At the opening, hosted by Maurizio Raeli, CIHEAM Bari director, Placido Plaza, CIHEAM General Secretary; Abdellatif Ghedira, IOC Executive director; and Carmine Nardone, Director of the Agriculture and Rural & Environmental Development Department of the Puglia Region, have pointed out the negative impact of the bacteria on the olive industry in general and the necessity to draw up a joint action plan to face this threat.

The Puglia representative pointed out that in the affected area only 4.000 of the 7 million trees were affected but that there was the urgent need to develop a standard and an information system that may avoid the dissemination of the bacteria to other areas and trees. He pointed out that during this international meeting a way of improving the management of the bacteria and to protect the olive heritage would surely be achieved.

The IOC executive Director and the CIHEAM General Secretary outlined the importance of gathering forces of international organisations like CIHEAM, IOC, FAO, EPPO and IPPC to achieve a joint strategy to protect the olive trees and international trade from the Xf bacteria.