WOOE, closed with the most international and multitudinous edition to date 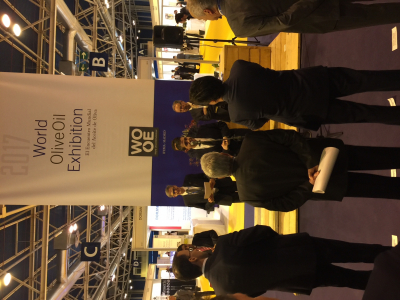 More than 3.000 olive oil professionals gathered in Madrid on the occasion of the World Olive Oil Exhibition, the crucial international trade fair devoted to the olive oil sector. 187 companies –most of them from Spanish regions, but also from other producing countries such as Uruguay, Tunisia or Morocco– were able to make trade contacts with purchasers, distributors and olive oil businessmen from more than 30 different countries (for example: from Dubai, Japan, China, United Kingdom, Italy or the USA).

More than 1.000 brands were displayed at the 6th WOOE. For example, brands represented by Protected Designations of Origin such as DO. Baena, PDO. Oli de Mallorca or PDO. Campo de Calatrava, large cooperatives such as the Group Montes Norte, El Progreso from Villarrubia de los Ojos (Ciudad Real), Viñaoliva or the Olive Oil Association of Alcarria, companies such as Aceites Palacio de los Olivos from Almagro or Aceites García de la Cruz from Toledo. Overall, packaging manufacturers, marketing companies, olive mills focused on the premium and gourmet markets, and an increasing number of organic olive oil companies: all attended the WOOE with the very same objective: to do business.

Regarding visiting countries, China was one of the key markets at the fair, thanks to the agreement signed between the World Olive Oil Exhibition and the Orient Group, the leading Spanish business group specialized in providing services to the Chinese community residing in Spain. Thus, thanks to this collaboration, the WOOE hosted a sizeable delegation of Chinese businessmen, as well as various Chinese media outlets.

The United States was one of the key countries at the 2017 WOOE; thanks to the participation of more than 20 businessmen who attended this fair for the first time and who came from different parts of the USA: Boston, Chicago, NYC and California among others.

Throughout two days under one roof, those attending the fair were able to discover the largest diversity of olive oils, due to the participation of nearly 200 olive oil companies. Professionals from 30 different countries –such as Dubai, India, Oman, Lebanon, Iran, United Kingdom, Japan, Italy and Greece– attended this trade fair.

A heavily frequented area was the Olive Oil Bar. An area conceived to taste in an independent way. This year’s Olive Oil Bar presented 140 olive oil samples: each of them was fully documented so that attendees could discover them in an autonomous and professional manner.

The program of conferences, tasting sessions and side activities have also found much interest and attracted more than 3.000 professionals.

The Gourmet Area and “Delicatessen with Olive Oil” were two of the most visited places during this year’s exhibition. The 2017 WOOE ended with a very positive result and this should indicate a constructive way forward. In this sense, we hope to continue our path of excellence and improvement during the next WOOE, whose dates will be announced soon.

The WOOE is a tool in the service of the olive oil international market, with the aim to aid the sector boost its visibility, the amount of business transactions and its profitability. This trade fair is organized by the company “Pomona Keepers”, and it is mainly geared towards cooperatives and olive mills that seek to open new exportation possibilities, as well as to strengthen their presence and visibility in the international markets. For the 2017 fair, the WOOE gathered major international companies in Madrid and achieved high attendances of importers from the United States, the Middle East, Italy and Central Europe.