Olive harvests in the Mediterranean countries

What is the outlook of the olive harvesting season in the Mediterranean countries? The estimates of a renowned international olive oil broker who operates on the Greek, Spanish, Tunisian, Turkish and Moroccan markets. There is still a lot of uncertainty regarding the overall amounts of available oil and the prospects of the key olive-producing countries 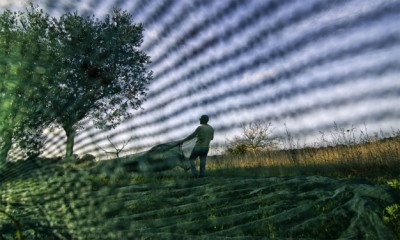 The production of olive oil is about to start in all the countries bordering the Mediterranean Sea.
Although most mills are already crushing the first batches of olives or, as Italian oil-makers say, “dirtying the machines”, there is still great uncertainty regarding the overall amount of oil that will replenish the stocks and production levels of each country.
We will now proceed to examine the situation in greater detail.

Spain
The greatest factor of uncertainty in estimating global oil production is Spain where, as we all know, hardly any rain fell throughout its scorching hot summer. As a result, most olive plantations are now under considerable water stress and only abundant, albeit late autumn rain, would relieve symptoms and improve their state.
The forecast for Estremadura and Casilla la Mancha is worse than last year.
In Andalucia, and Jaen in particular, if it doesn’t rain generously within the next two weeks, the already gloomy outlook might get even worse.
Non-irrigated or secano groves display the greatest problems: in many areas the olives have already turned black and are about to fall. On a more positive note, there have been no infestations of olive fruit fly, if not in very limited areas.
The estimate is of roughly 1,350,000 tons, with a 10% – 15% margin of error, depending on the weather in the next few weeks.
By the end of October, the carry-over stock in the hands of the producers should tot up to around 100,000 tons, and an estimated further 150,000 tons is in stock down the supply chain.

Tunisia
The heavy rain that fell in Tunisia in early October relieved the critical state of the country’s olive tree plantations. Up to a few days beforehand, the brokers expected a harvest ranging between 80 and 100,000 tons. Currently there is greater optimism, and it is generally believed that production will easily exceed 100,000 tons.
In this case too, non-irrigated groves (which are quite common) are those suffering the most from the lack of rain. These are mostly located in the environs of Tunis, Sfax and in the southern part of the country. Irrigated plantations, mainly present in the governorates of Kairouan, Sidi Bouzid and in South-west Tunisia, can yield better harvests.
At present, after the recent rainfall, the appearance of the plantations has improved, and the outlook is definitively rosier.
Carry-over stocks are practically non-existent.

Greece
The situation is rather heterogeneous. The island of Crete has been swept by warm winds of sirocco, especially along the coastline, which wreaked havoc on olive production. Instead of a potential harvest of ca. 130,000 tons, this year’s yield is expected to range around 60/70,000 tons.
In the rest of the country, the outlook is more positive, with good production levels in Mytilene and central Greece, and fairly satisfactory ones in the Peloponnese. As usual, further spells of rain, especially on the island of Crete, would increase this year’s harvest levels. At present, experts predict an overall yield of approximately 220,000 – 250,000 tons.
Carry-over stock appears to be negligible, but it is hard to be precise, since the country’s internal market is highly fragmented.

Turkey  official estimates credit the country with a production ranging between 180,000 and 190,000 tons, but some brokers believe that the levels might even be higher, around 220,000 – 230,000 tons. This may well be true, because in recent years, the number of olive plantations in the country has greatly increased. Oil production peaks in northern and southern Turkey in late October – early November.