Inauguration of the olive garden 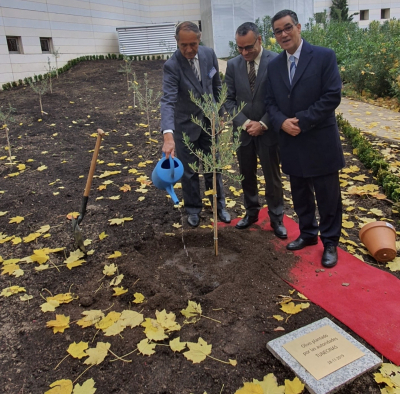 As we celebrate our 60th anniversary and Unesco’s proclamation of World Olive Day, the Executive Director of the International Olive Council, Abdellatif Ghedira, inaugurated an olive garden at the Organisation’s headquarters in Madrid.

The trees were donated by the Santander Foundation. They belong to the Farga variety and are descendants of an almost one thousand-year-old olive tree, the Minerva, which dates back to 1037. The Farga variety is known for the unique characteristics of the oil produced from these centuries-old trees. The olive garden project of the Ioc was carried out by the head of the technical and environmental unit, Mr. Abdelkrim Adi.

In the photo, Ioc Executive Director Abdellatif Ghedira, centre; on his left, the Egyptian Ambassador to Madrid, Omar Selim, and the Georgian Deputy Minister, Khatia Tsilosani; on his right, the Tunisian Ambassador to Madrid, Wacef Chiha, and the Chairman of the Advisory Committee on Olive Oil and Table Olives, Ali Bel Hadj M’Barek, can be seen planting one of the young olive trees of the garden.