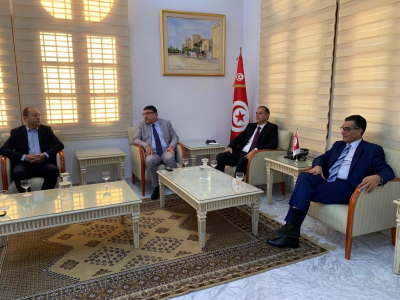 The Executive Director, Abdellatif Ghedira, was invited to the inauguration of the fourth edition of the Olive Oil Fair in Sfax by the Tunisian Farmers’ Association on 14 December 2019. He was accompanied by the Head of the Technology and Environment Unit and the Head of the Department of External Relations.

The IOC delegation was received at the governorate headquarters by the Governor of Sfax, Anis Oueslati; the Chief of Cabinet of the Minister of Agriculture, Water Resources and Fisheries, Boubaker Karai; and the Chair of the Tunisian Farmers’ Union and organiser of the event, Faouzi Zayini.

The Governor, the Executive Director, the Chief of Staff of the Minister of Agriculture and the many distinguished guests officially opened the Olive Oil Fair and launched the many activities scheduled for the event. During the ensuing discussion, local authorities and professionals from the region expressed their wish to hold the meeting of the Advisory Committee alongside the fifth edition of the Olive Oil Festival in Sfax in 2020. The Executive Director said he would submit this request to the Chair of the Committee.