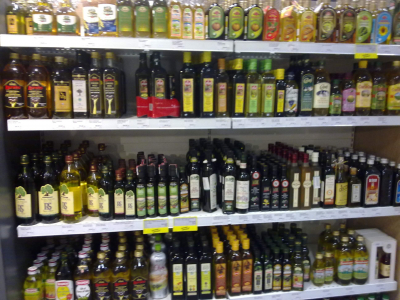 Imports of olive oil (customs heading 15.09) and olive pomace oil (customs heading 15.10) through the first ten months of the 2014/15 crop year (October 2014–July 2015) are reported in the table below for a number of countries. Compared with the same period in 2013/14, Japanese imports have risen by 9 pc, showing strong growth since March 2015. In the case of the United States, import increases in March, April and June have been offset by decreases in March and April; as a result, imports remain stable overall. Imports into China are likewise holding steady. Conversely, imports into Russia are lower (−29 pc), prompted by a switch of trend in December 2014, as well as into Australia (−20 pc, on a constant downward trend since November 2014), Canada (−9 pc) and Brazil (-6 pc), which recorded sharp decreases in May and June.

The July 2015 data were not available for the EU at the time of publication but the figures for the first nine months of 2014/15 show an increase of 3 pc in intra-EU acquisitions and 288 pc in extra-EU imports compared with the same period a season earlier. Owing to the heavy drop in 2014/15 production in Spain and Italy, extra-EU imports by both countries soared, particularly imports from Tunisia (+1192 pc and +336 pc, respectively) compared with a season earlier. As reported in the previous issue of this newsletter, this upward movement began in December 2014 even before the change in the EU regulation on the tariff quota at zero-rate duty, a fact connected with the large climb in Tunisian production in 2014/15.