In the Americas, Argentina is the leader both as producer and exporter of olive oil and table olives. Across all provinces, modern production systems co-exist with traditional systems. Modern farming systems, such as intensive or super-intensive farming, are the models generally applied in the various olive growing regions of this country 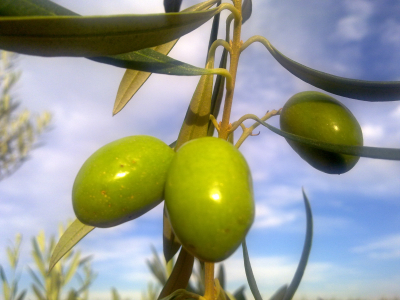 At the invitation of the Argentine authorities, the 107th session of the Council of Members will be held in Buenos Aires (Argentina) from 18 to 21 June 2018. Argentina was the first country of the Americas to accede to the International Agreement on Olive Oil, in October 1965, and it continues to participate actively in the implementation of the successive International Agreements on Olive Oil and Table Olives and in the working groups set up to examine the Organisation’s activities. In 2018 it holds the presidency of the IOC.

In the Americas, Argentina is the leader both as producer and exporter of olive oil and table olives. It has an estimated olive acreage of 90 000 hectares, most of which is irrigated. Approximately 50% of this area is used to grow olive varieties for olive oil, 30% is used to produce table olives, and 20% for dual purpose olives. The largest olive growing areas are found in the provinces of La Rioja, in the lead with 27.8% of the total olive growing area, followed by Mendoza (22.9%), Catamarca (20.8%), San Juan (20.2%), Cordoba (5%), Buenos Aires (2.8%) and lastly Rio Negro (0.6%). 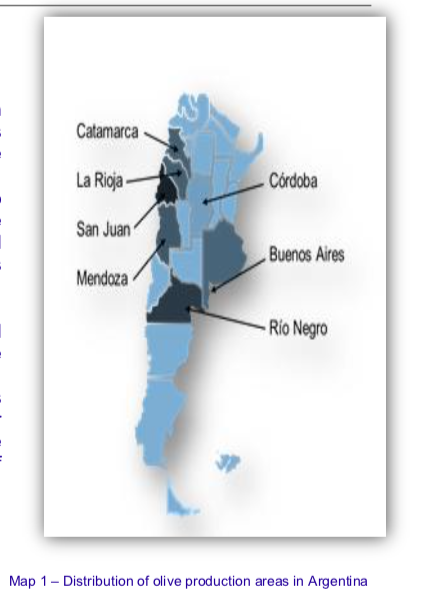 The two main industrial activities of Argentine olive production, table olive processing and olive oil extraction, are very important for the development and growth of the regional economy. They both have strong roots in the country, dating back to the Hispanic period in Argentina, endowing the products from each region with unique characteristics and specific attributes. 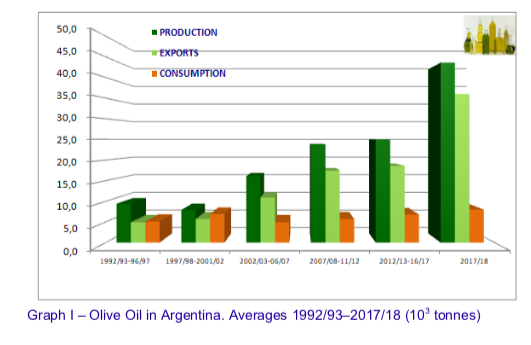 Over the last few decades, tradition and culture have led to investment in advanced technology that has given a new impetus to activities through extra-sectoral investments. This transformation has enabled the renewal of traditional plantations, extending the olive growing surface and incorporating new varieties, with localised irrigation and mechanical harvesting equipment. In parallel, the production industry has adopted state of the art processes and technology to accompany growth in the sector.

The table olive sector has undergone strong growth. Graph II shows the trend in the averages for the last five five-year periods, going from an average production of 39 600 t to 97 800 t, which is a 147% increase, reaching a maximum average production in 2007/08– 2011/12 of 131 000 t. Consumption has increased in recent crop years, settling at around 40 000 t. Exports follow the same trends as production. The main destinations of Argentine exports are Brazil, where it is the main supplier, followed by the United States, Chile and Uruguay. 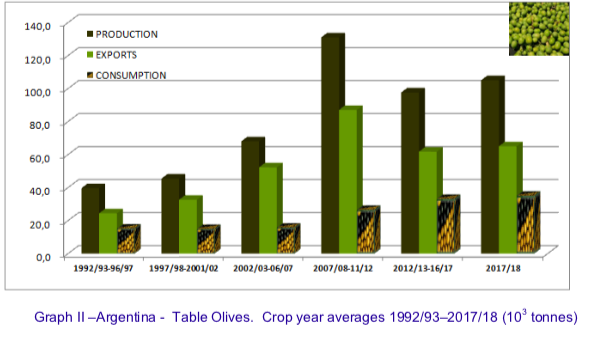 Key facts about the production sector in Argentina

Across all provinces in Argentina, modern production systems co-exist with traditional systems. Modern farming systems, such as intensive or super-intensive farming, are the models generally applied in the various olive growing regions of this country. Low-density intensive domains have plantation frameworks of 200 to 800 trees/ha of varieties that are mainly used for the production of extra virgin olive oil. Irrigation is localised and pruning and harvesting are mechanised. Average expected output is of 10 tonnes of olives per hectare.

The super-intensive model, in orchards of more than 800 trees per hectare, is applied in areas in which the agro-climatic conditions restrict plant development. Lower-bearing and less robust cultivars, such as Arbequina or Arbosana, require shorter distances between rows and a rapid entry into production. In this model, rows are set at 5 to 2 m between plants.

In contrast, plantations using the traditional model have wide patterns with densities of 69 to 156 trees/ha. They are made up, in the main, of old Arauco cultivar olive trees, which are mainly used to produce table olives. Other characteristics of this system are: low use of technology, surface irrigation (basin or furrow) and manual harvests. In these plantations, the expected average output is estimated at 5–6 t of olives per hectare.

Regardless of the production model, the harvest begins at the end of January or the beginning of February and continues until the end of June, depending on the area and variety. The manual harvest begins in the northern provinces, mainly in La Rioja and in the Catamarca Valley, with the table olive varieties. From the end of March and until May, the olives for olive oil are harvested, generally using mechanised harvest processes. The harvest in the provinces in the south of the country is carried out from May–June. The mechanisation of the harvest of olives for oil has shown a growing tendency towards improving performance. For this reason, many producers are adapting their olive orchards to mechanical harvests by applying pruning techniques.